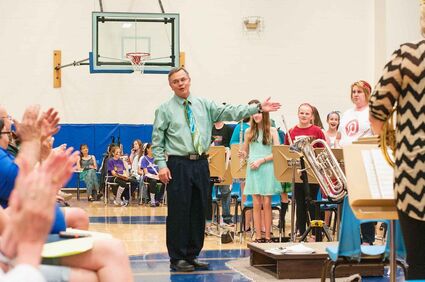 Havre Middle School band teacher David Carlson points to the band during a round of applause May 5 at the middle school during the spring Pops concert. Carlson is retiring this year after decades of teaching music, including 27 years at Havre Middle School.

Dave Carlson directed his last concert with the Havre Middle School band May 5.

Carlson said he's not a crier. But in an interview Friday, he said he got "emotional" during that performance. He said some of his flute players told him it was his fault they cried - if his eyes wouldn't gave gotten "watery," they wouldn't have cried. He admitted that his eyes got watery that day.

Carlson is retiring. He said he wanted to do so while he was still young enough to "try some things." He has some ideas, but he hasn't decided.

Sometimes, he starts to say something and then interrupts himself, as...