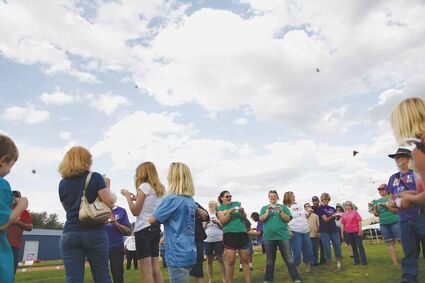 People watch the release of butterflies July 25 at the 2015 Havre Relay for Life. The organizers released the butterflies as a sign of hope and that wishes will come true.

It's likely to be that way again tonight as the largest anti-cancer program in the area takes place at the track at Havre High School.

Money raised will go to the American Cancer Society to fund research and assist families of people with cancer.

The program begins at 6 p.m., but there will be a barbecue at 5 p.m., said Jalyn Keighley of the American Cancer Society.

At 6 p.m., there will be speakers and introductions of the many people in the audience who have helped in the fight against cancer over the years, she said.

At 7 p.m., the Survivors Walk will begin.

Hi-Line residents who have defeated or are defeating cancer will walk around the track behind a large American Cancer Society banner as inspirational music is played over the loudspeaker. Crowds cheer on the participants as they make their way around the track.

Luminaries will be sold, and teams who have pledged money will walk around the track for the rest of the evening.

Keighley urged people to show up, have a good time and help out in the fight against cancer.