Rain doesn't slow down the fun at the Blaine County Cruise 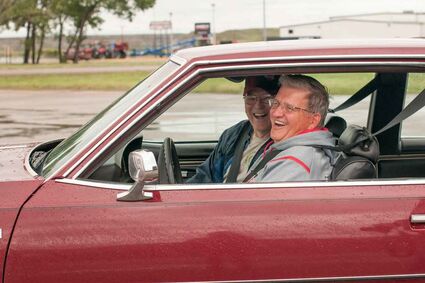 Gary Visser, back, and Bob Walls smile Saturday as they drive their Buick through a checkpoint at the weigh station at the junction of U.S. highways 2 and 87 west of Havre during the Blaine County Cruise.

Marvin Potter of Harlem stood proudly next to his 1985 Corvair in the parking lot at the Hill County Weigh Station at U.S. highways 2 and 87 Saturday morning.

It was cold and rainy, the coldest and rainiest in the six-year history of the Blaine County Cruise.

But Potter was chipper as he talked about his love of cars, especially older ones.

Adorning his Corvair were two American flags that are on his car at all times, he said.

He's had flags on his car since Sept. 11, 2001, he said. As he saw the Twin Towers collapse to the ground, he made a decision that he was going to let the world k...