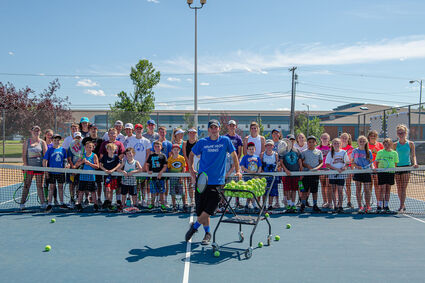 Havre High head tennis coach George Ferguson with 40-plus kids who participated in Havre Tennis Camp earlier this week. Ferguson is approaching two decades as the head tennis coach at the school he attended and played for, and while his teams have had the highest levels of success over the years, he says, his gratification comes from working with all of the great kids he's coached in his time. He also says, he loves coaching at HHS just as much today as he did when he was 25 years old, when all of it began.

The history of great head coaches at Havre High School is long and storied. But when you are talking about the greatest and most influential coaches in the long tradition of Blue Pony athletics, you simply have to include the name of George Ferguson.

Of course, Ferguson has made his greatest impact as the head coach of the Blue Pony tennis teams, but after a great legacy as a player, a sportswriter and soon-to-be Havre High head golf coach, the lasting impact of everything Ferguson has done for Havre High sports will be hard to measure up to.

At the end of the day, you will be hard press...