Veteran Blue Ponies hoping to stampede their way through 2019

With great senior leadership, this fall could be a breakout year for Havre football 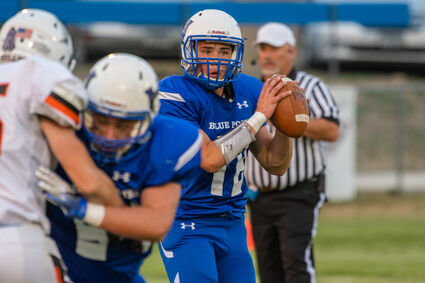 Havre High quarterback Reese Bulkley looks to pass during a 2018 Eastern A Conference game in Havre. The Blue Ponies are excited about the upcoming season, which starts Friday night in Sidney.

The past two seasons haven't gone exactly as planned for the Havre High football team, but after taking some incremental steps forward last season, the Blue Ponies are looking for a big leap in 2019 - big enough to get the team back into the playoffs for the first since 2015.

But in order to end that drought, the Ponies will need to win at least two or maybe three more games, following a 2-7 campaign a season ago.

"We feel really good." HHS head coach Ryan Gatch said. "Our numbers are great; our energy is great and we have a lot of kids that have invested a lot of time in this program. T...