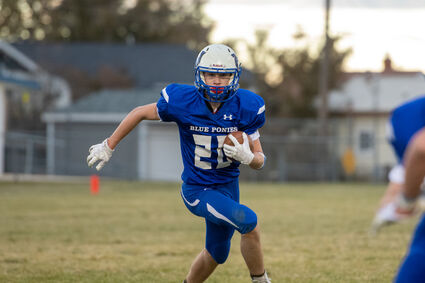 The rematch against the Mustangs was big for Fort Benton, as it decided who the champion of Northern C is. The game may have a lower score than most 8-man games, but it was a close rematch between two teams.

The Longhorns opened the first quarter with eight points on the board and stopped Great Falls Central from getting into the endzone. But, Fort Benton did not score at all in the second quarter and allowed the Mustangs to thin the lead with a score.

With a slim score of 8-7, in favor of the Longhorns, at the half, both teams would have to work hard to put some more points on the board.

Great Falls Central tied up the game in the third quarter after another score, while Fort Benton scored, as well. A 14-14 tie looked to be broken in the fourth quarter.

The Longhorns found a spark in the last quarter of the game, scoring six to put them in the lead 20-14. Then, Fort Benton’s defense held the Mustangs to a scoreless quarter once again and the Longhorns came out of the intense scrum with the win.

Fort Benton (8-0), who won the 8-Man North, will take the first seed in the playoffs after the win over Great Falls Central Catholic (6-2), who will take the second seed.

A North third seed is on the line for North Star (5-3), as they look to defeat Denton-Geyser-Stanford (5-3) this Saturday in Denton.

The Chester-Joplin-Inverness High football team had a tough loss against the Simms Tigers last Wednesday night in Chester. The Hawks fell to the Tigers 58-14 and will look to try and find a win in what will be the final game of 2019 for CJI, when the Hawks host rival Chinook tonight in Chester.

The Sugarbeeters, who will play their season finale tonight in Chester, blasted Rocky Boy in a Northern C road game last Friday night.

The Beeters beat the Stars 69-6. Chinook ran off to a 20-0 lead over Rocky Boy on Friday night in Northern C 8-Man action. Then in the final 1:26 seconds of the first half, the Beeters scored three more times en route to a 47-0 halftime lead.

The Harlem Wildcats found more struggles in their Northern B game against the Cut Bank Wolves. The Wildcats were shut out by the Wolves 66-0.

Harlem’s season has been tough, but the Wildcats (0-7) will look to find a win against the Conrad Cowboys (2-5) Friday at 7 p.m. 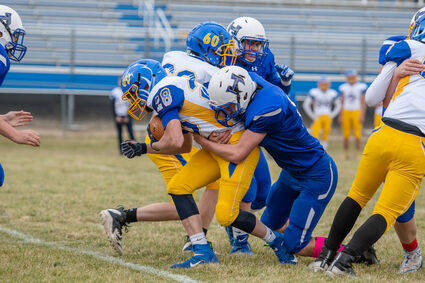 The Box Elder High football team had some complications with healthy players and unfortunately had to forfeit the game against the Tri-City Titans, last Saturday.

Undefeated and top-ranked Big Sandy had last weekend off, but the Pioneers are back to work this week. They will travel to Dutton to take on Power-Dutton-Brady for the Six-Man North Division championship.