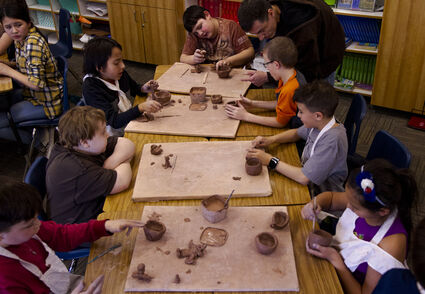 Visitors to Artitudes Gallery have the chance to see a younger view on art starting today when 26 Sunnyside Intermediate School students from Erin Lynch's fourth grade class showcase their art projects at the art cooperative.

The show starts with a reception tonight from 6 to 8. The show runs through Thursday, April 30, at the gallery in the Atrium Mall.

Lynch said students would be at the reception tonight.

"We'll have students present to talk about the pieces they decide to show, as well as artist statements written by each student to accompany their art," Lynch said.

The show is called "26 Pieces," which represents the 26 kids in her class, with each student contributing one piece of their choosing to the show, she said.

She added that Havre High School teacher Kendall Griggs came in and helped her students create their art pieces.

"The purpose of '26 Pieces' is to provide students an audience beyond that of the standard classroom," Lynch said.

She said that, in class, they've been working on mini-research projects coupled with mini-presentations to not only teach the students how to research, but also how to speak to a group. The reception today will allow students the opportunity to speak about their work to their families and the general public in a safe environment, she added.

"I know the students are a bit nervous about this, but we're practicing as this is a life-skill I want them all to develop," Lynch said.

She said she has been teaching the elements of art and has had the the students create their own art based around each element. This approach has served as an introduction to art which will lead to deeper study.

The theme of the art itself is simply based around the elements of art, she added, and the show's name was chosen by the students to represent the 26 of them.

Lynch said a few years ago she was part of the statewide committee to write and edit the Montana Arts Standards. She added that the arts are vital to the education and development of students to help them become well-rounded individuals.

"I also love to incorporate the study of art into other content areas such as social studies as a way of introducing cultures or time periods," she said.

The art show itself came together when she was reconnecting with people around town and talking with Kris Shaw from Artitudes Gallery. Lynch said she suggested the show, adding that she knew she couldn't allow the opportunity to pass.

"I'm looking forward to the students having their time to shine. They've been working hard and they'll get to see the results of that hard work," she said.

"(This is important) to teach them about galleries and presenting, and they'll be there and talk to the people who come to talk about their art work," Nault said.

"I just remember this is one of the things we talked about when we started the gallery, is no one ever taught us what it was like to have to do an art show or how do you even do anything," Shaw said. "When I was in school, I remember in eighth grade they did an art show, but the teacher hung it then we all came and looked and that was all. Then in high school, they'd take our art somewhere and say it was in a show then bring it back, but we never learned anything about how to put it in a gallery or how to charge for it, or to talk about it."

Artitudes features a new artist each month, holding an artist reception with the public usually on the second Friday of the month. The artists get to display their work in the gallery for two months.

Shaw said, she thinks this type of art show can keep the students involved in and wanting to know more about art.

At the show, the students will also be able to make some profit from sales of their art piece or pieces.

Sunnyside fourth grader Kerrington Kraske said she made a mountain landscape art piece for the show.

"(I chose to do that) because I feel like I did the best on that out of all my artwork," she said.

She said she also made some pastel art pieces and watercolor paintings.

"(I'm looking forward) for people to like the art I made," she said.

If she receives money from her art, Kraske said, she would save it.

He said he is looking forward to the art show for everyone to come and like his art.

Knutsen said he would buy a new cat or dog from the money he receives from his art.

"I made a picture of a cat with pastels," their classmate Marissa Garcia said.

She said she decided to make it because it looks really colorful, using the colors yellow, pink and baby blue.

She wants to just have fun at the art show and for people to look at her art, she added.

"I would buy cat food and some cat stuff," Garcia said about her plans for the money from her art pieces.

"It's one of the best pieces of art I've made, and there's good techniques on it. Also, the fish are cool," she said.

Vandegenacht said that any money she collects she would like to donate back to Sunnyside and her class to buy art supplies.

"The clay is my favorite, but I wanted to do my color painting just in case my clay exploded," she said.

"I made a ski hill because I like it and I got to paint," fourth grader Wyatt Anderson said.

He said he enjoys painting and drawing.

Classmate Onika Fangmeier said she made a ski lift piece as well for the art show and is looking forward to the food that will be available at the reception.

She would buy a new phone, she said, from the money she received from her art project.

Lynch said she has been talking with Shaw and is working on making this an annual event for her students in the future.

"I'm excited to see this event evolve and develop," she said.

"We would love to have anyone or any teacher who's willing to come and do an art show with us," Shaw said.

And Lunch is working on the next project for her class. She said they have been reading "Pay It Forward," a young readers' version, as a full-class novel, and they are discussing ideas that they could do as a class along this theme. 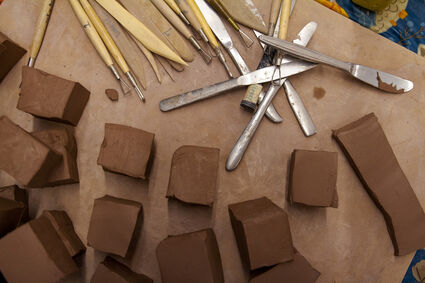 She said that on Valentine's Day the class started their day with each student thinking of one person in the school building who they thought could use a note with a few words of encouragement, who was perhaps underappreciated or just needed a pick-me-up, then they snuck around the school and secretly delivered the notes.

"When we got back to class, they commented on how great they felt putting the kindness out into the world and asked if we could do more," Lynch said. "I'm hoping to capitalize on that feeling that the kids had and create a culture where that kindness is the standard. The kids have been talking about participating in the community cleanup around Earth Day and even the possibility of creating a partnership with residents of the Care Center. I want our next project to come from the kids so they feel ownership over it."