It's official: Winter was mild 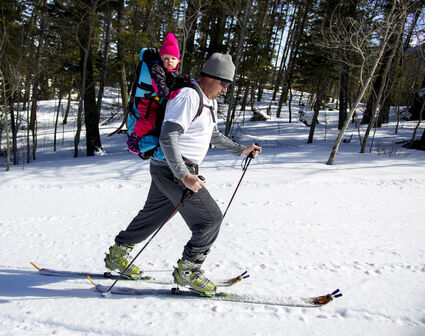 Trying to make the best of the conditions, John Brown skiis up the mountain with his daughter Claire, 2, on his back Sunday at Bear Paw Ski Bowl in the Chippewa-Cree Recreation Area.

Officially, winter is over. But in Havre, is it really ever over for good?

That's the question everyone wants to know as spring has sprung. Of course, Havre and much of Montana got a big gasp of winter just a week ago when 7.1 inches of fresh snow fell in the area, and a week later some of it still lingers, as below average temperatures followed.

However, according to Matt Jackson of the National Weather Service in Great Falls, Havre's winter was not average, not by a long shot.

As far as snowfall goes, Havre received just 14.1 inches from Dec. 1 to Feb. 29. That makes it the 19th least snowiest winter on record. The record for the least amount of snow for a meteorological winter was just back in 2011 when only 3.2 inches fell on Havre for the entire winter.

"It was a relatively mild winter for Havre," Jackson said. "Probably because of the cold, snowy fall, it may have seemed a little worse, but, for the actual winter, it was definitely on the end of the spectrum where it was pretty mild."

Fall did make a difference too. The incredible snowstorm on the final weekend of September, combined with plenty of snow and cold in October and November, makes it seem as though it's been a very long winter in Havre. And in fact, because of that storm, and the snowy fall that followed, even with a drier than normal winter, Havre is still sitting well above normal for seasonal snowfall.

According to the NWS in Great Falls, as of March 16, Havre had received 63.7 inches of snow for the season. The normal in-season total was listed at 31.2 inches, while the record for seasonal snowfall on March 16 was set in 2018 at 79.8 inches. The record for an entire season is still 93.3 inches.

In comparison to what Havre has experienced this season, Chinook has received just 36.5 inches of snow through March 16, while Turner has seen 76.8 inches fall as of March 16.

And while snowfall has seemed to have plagued Havre for seemingly ever, since that storm in September means it has snowed in seven consecutive months, according to Jackson, residents of Havre, the Hi-Line, or anyone in Montana, shouldn't put their shovels and snowblowers away just yet.

"It's not unusual to see snowfall in Havre for nine months of the year," Jackson said. "I think it feels unusual this season because of the snowstorm at the end of September. That was a lot of snowfall for that time of year. But, Jackson said, it's not unusual to see plenty of snow in March and April, and even sometimes May. In parts of Montana, we see snow in June and August too, so what we're seeing this season isn't uncommon at all."

Spring, according to Jackson and NOAA, which recently released its three-month spring outlook, won't likely be uncommon in Havre either.

According to NOAA, the outlook for the remainder of March calls for at or below average temperatures, and a 40 percent chance of above average precipitation. The seven-day forecast for Havre this week, starts with a high of 27 today and 38 Wednesday, before warming back up to the high 40s and low 50s over the weekend. There are also slight chances for snow and rain tonight, Wednesday and Wednesday night.

With warmer temperatures surely to come, following also becomes a concern all across Montana and while a large swath of Montana wasn't listed as a concern, NOAA did list a portion of north-central Montana, including the Milk River Valley as having a minor to moderate risk for spring flooding.

In other words, when it comes to spring, Havre, the Hi-Line and much of north-central Montana should brace for normal, Jackson said. 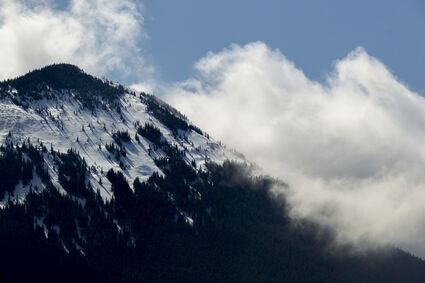 "I think that's the key, we should expect a typical Montana spring," Jackson said. "It will get warm, then cold, then warm again, and that trend will probably continue well into May. We'll see snow and rain as well. In spring especially, you really see the extremes here in Montana."

As spring comes and visions of summer begin to dance in folks' heads, this season will be anything but usual of course, with the world gripped in the COVID-19 crisis. Much has been made of the possibility of COVID-19 being tamped down some by the arrival of warmer, more humid weather in the United States and Europe. However, the Centers for Disease Control recently issued a public statement on weather and the coronavirus.

"It is not known whether the spread of COVID-19 will decrease when the weather becomes warmer. There is much more to learn about the transmissibility, severity and other features associated with COVID-19 and investigations are ongoing."