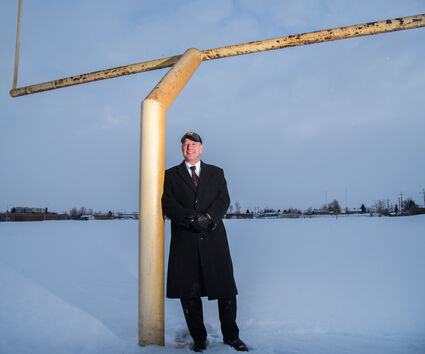 Montana State University-Northern Chancellor Greg Kegel leans agains a goal post on the Northern Lights football team practice field. Kegel recently discussed being quarantined after being exposed to novel coronavirus 2019 and making decision on how Northern would proceed during the pandemic.

So many people around the country over the last couple of months have had the same experience. They get a phone call telling them they've been in contact with someone who has tested positive for COVID-19.

The call, of course, can be jarring, downright scary. Then comes the request from the caller for that person and others they've come into contact with to self-quarantine until they either have been tested for the virus, or until 14 days have passed with no symptoms.

That exact scenario is no longer uncommon in the country, but what is a little more uncommon is, when it happens to someone who, at the same time, is faced with leading a university through perhaps the most challenging couple of weeks in its history.

And that's the exact experience Montana State University-Northern Chancellor Greg Kegel went through back in early March, when the coronavirus was just taking off in the United States and just after it had finally made its way to Montana.

"So we were at the (Montana) Board of Regents meeting where, Commissioner (of Higher Education) Clay Christian ultimately contracted the virus," Kegel said. "That meeting was in Dillon and, that night, the Skylights were playing Western in the playoffs, so we attended that game, with Clay. He is a very good friend of ours, and so, we were in very close contact with him. Sherry even gave him a hug and he and I sat together. So we were in very close proximity."

That night was March 4, which was eight days before the first cases of COVID-19 in Montana were announced.

"So about a week later, Clay calls me and we start to discuss the fact that COVID-19 is becoming an issue," Kegel continued. "So we are taking about what types of things we will probably need to do as we move forward and more cases get confirmed in Montana. We were already planning for it at that point.

"The very next day," he added. "I got a phone call from the health department telling me Clay had tested positive for COVID and that Sherry and I needed to go into self-quarantine. At first I just thought What? It was pretty scary to receive that call, and I knew things that the next weeks were going to be pretty crazy."

Neither Kegel nor his wife would contract coronavirus, but during his self-quarantine and isolation, he would have to make some monumental decisions for Northern, the types of decisions he's still making nearly two months later because COVID-19 continues to alter the playbook from day-to-day.

"The first couple of weeks when this really got going, it felt like I was making a decision, a big decision about our university every hour," Kegel said. "First, it was how do we move as much of the curriculum as we can online, to then moving everything online, to closing our library to closing our gym and all other athletic facilities. We had to postpone graduation. It just never stopped.

"It was also during that time that, I pulled up our calendar of events for the spring," he continued. "And until you look at the whole thing, you don't realize how many events we hold, even at a small school like Northern. Just in the spring, there were so many events that had yet to be held, and I had to end up canceling one after another after another."

No doubt, as the virus took hold in Montana, campus life became literally non-existent. By the end of March, students were asked to move off-campus if possible for their own safety, and almost all campus facilities not only in Montana, but around the world were shuttered for the remainder of the semester.

"It was during that time we happened to be on spring break," Kegel said. "And so at that point, the biggest thing we had to establish was, the safety of our students, and I made the determination that, there was no way at that point, we could safely have 1,200 students come back to campus. But, we also knew, some students just had to be here. They didn't have anywhere else to go. So the next thing we did was set up a quarantine site up at our married student housing complex. We moved beds and things up there, and we got those students that were still here in there to where they can be very comfortable.

"Then we came up with plans on how we could still take care of those students that were still here," he continued. "So student services, our food service people, they have really stepped up through all of this and our doing a great job. I think we're down to about 19 kids on campus right now, and they're getting everything they need, so a lot of people have done a really good job."

With the remainder of the semester moved to all-online, with almost all of Northern's student body gone, and those that couldn't leave, housed properly, Kegel then turned his focus to big decisions he had to make in regards to the safety of his staff.

"That was very important to me," Kegel said. "The last thing I would ever want to do is expose our professors, and our entire staff on campus to anything harmful. We have plenty of staff members who have pre-existing conditions. So we moved as many of those people as we could off campus and have had them work from home. I think we've done a really good job with that too, and about two weeks into all of this, we were down to just Cowan Hall being open for essential workers and offices only, and even now, we're all doing a good job in there of social distancing and practicing the highest standards of safety."

Safety continues to be Kegel's main concern, too, and as the semester winds down, he now starts to look towards what the next semester at Northern holds.

"That's what a lot of my meetings have shifted to," Kegel said. "I'm on calls with the NAIA and the Frontier Conference about sports, and the big question is, what do we do next fall. And right now, I can say this. We are going to all work together, the university, along with the community and the health department, and the governor, who I think has done a great job of not allowing Montana to become a hotspot for this thing, all of us together, we're going to do whatever we can to have our students back on campuses in the fall. We're going to do whatever we can to safely ensure that that happens."

No question, everybody, from students to faculty to Kegel, are hoping that college life can safely return to some sort of normal next fall. But, when he looks back, Kegel also knows he just went through something that was anything but normal.

He had to guide his school through something never seen before, all the while, wondering if he, and his wife might be infected with the very virus that he was making monumental decisions to protect his students from.

"It was certainly an experience," Kegel said. "That first week, when all this happened, it was crazy. This is something none of us have ever had to deal with before. In the end though, I think we've done the right things. I think we've done things that ensured the safety of the students that go to school at Northern, as well as our faculty and staff and the community of Havre. I think a lot of people have done a really good job of handling this situation here, and that's what we'll continue to do. We'll continue to do the right things."