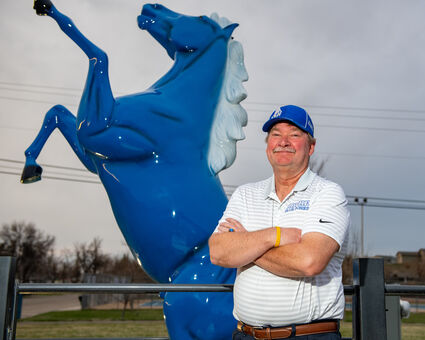 Havre High Activities Director Dennis Murphy is retiring after a career that has spanned 35 years, 30 in Havre, and almost 20 as the AD.

Dennis Murphy once said an emotional goodbye to what was a brilliant career coaching girls basketball. But, as tough as that day was for Murphy, it wasn't the end of his journey in education.

Instead, Murphy went on to serve as Havre High's activities director for another 18 years after he walked away from coaching basketball.

Last Friday however, Murphy again said a heartfelt goodbye, only this time, he signaled the end to his career at Havre High, as well as the end to 35 years in secondary education in Montana.

"When I look back, I have to say thank you to Kirk Miller and Jim Donovan for giving me this tremendous opportunity to be the activities director here," an emotional Murphy said. "I read once, a woman who said, success for her wasn't measured in championships and things like that, it was measured by the moments that brought a smile to her face. Well, I've had a lot of smiles from my time at Havre High."

And Murphy certainly made the most of his time in Havre Public Schools. He first came to Havre in 1990, as the new head girls basketball coach, as well as a PE teacher. He would go on to lead the Blue Pony girls to enormous success. Including guiding the Ponies to the 1997 Class A state championship, and overall, he took Havre to four title game appearances, as well as countless successes in the Central Division. Murphy, who coached at time when girls basketball was still in the fall in Montana, also spent several seasons as a boys assistant coach, and one as HHS head coach, before he stepped down from coaching in 2002 to focus on the AD job full time.

In all, Murphy has spent 30 years in Havre.

"It's ironic because, I had come to KG (Kremlin-Gildford) to coach in 1985, and I loved it. It was a special place, and coaching in the 9C is very special," Murphy said. "But, then I actually had an opportunity to possibly go back to Florence, where I had come to the Hi-Line from, and that would have been closer to Missoula, and it would have been a very comfortable situation for us.

"But, at the same time, when you're coaching basketball on the Hi-Line, you always look at Havre High as the place you want to be, as a place where you want to go next as a coach," he added. "And so, I was very fortunate that Charlie Klimas called me and eventually offered me the position coaching in Havre. I will always be so grateful to Charlie for giving me that amazing opportunity."

And the rest they say, is history. In a profession that seems to be nomadic, Murphy never saw a reason to leave Havre again.

"This is a special place," Murphy said. "In so many ways. As a teacher, Havre is a great educational institution, and then to be able to coach here, it's very special. I was so lucky to coach so many great kids. They are all special, so I was really so very lucky to get that opportunity."

Murphy certainly touched the lives of many through his successful coaching career at HHS, but his impact as the activities director was even greater. His list of achievements are endless, including winning several AD of the year awards, being recognized for his contributions on a national high school level, and serving on countless boards, committees and ultimately chairing many of those in the Montana High School Association, where he has also left an indelible mark on not just Blue Pony activities, but on sports and activities around the Treasure State. To put it mildly, few ADs in Montana were as valued on a state level as Murphy has been over the last two decades.

In his time at HHS, Murphy was also an instrumental part of many key facilities improvements at Havre Public Schools, including the major Blue Pony Stadium renovation in 2004, the renovation of the Havre High auditorium, several upgrades to the Havre Middle School Track, the redesign of the floor inside the HHS Gymnasium, the building of the new gym at Sunnyside and most recently, the addition of the Havre High Wrestling Room, the new weight room and the subsequent renovations inside the HHS gym that came with it.

"I'm very proud to have been a part of our facility improvements we've been able to do over the years," Murphy touted. "My good friend the late Griff Bye once told someone who was asking about coming up to a softball game in Havre, he said: 'You don't have to worry about Havre, they have great facilities, it's a great community and they're always going to make sure their facilities are the best they can possibly be.' So that meant a lot.

"Obviously, the renovation to Blue Pony Stadium was a big project, led by Ric Floren," Murphy continued. "That stadium is so unique, but when we did the renovation, it made it that much more special. I think the remodeling of our auditorium was a really important project, too. And obviously, the new wrestling room and weight room, those were huge projects that really put us on a different level with our facilities. And along with that, the renovations of all of our locker rooms, that was really huge for our school. And everything we've been able to do, we did it with great community support. That's another thing that's so special about Havre High, the community support we get is second-to-none, and that has meant so much to me through the years."

Awards, facilities, watching championships come to Havre via basketball, football, wrestling, swimming, tennis and more, it has all been special to Murphy, and much of those great triumphs at Havre High are also a direct result of Murphy's dedication to his job as activities director.

And Murphy has truly been an activities director and not just an athletic director.

"I've always tried my best to support everything in our school equally," Murphy said. "It didn't matter if it was the state championship game in football, or the District Music Festival, they are all special events, and big events for our kids and our coaches and faculty. I've always believed that. I might not have been as knowledgeable about some activities as I was about others, but I've always tried to make sure I supported them all equally. That was always important to me."

Indeed. Murphy didn't miss much when it came to supporting everything that fell under the activities umbrella. Whether it was working a state basketball tournament, traveling to the State Music Festival, being the MHSA representative at the Montana State Swimming Championships, judging the Havre speech and debate invitational, running the Central A divisional tennis tournament, the list of events Murphy not only attended, but helped, worked and ran are endless. If it was an activity, Murphy was always there, supporting the Blue Ponies and his coaches and student-athletes. It has been said in MHSA circles that few people in Murphy's profession have logged more miles in the state of Montana than he has in the last two decades.

And he did it because it was his passion.

"It's amazing to look back on it all," he said. "I could never dream of a better profession to be in than this one."

Again, Murphy has presided over an Activities Department at Havre High that has seen the highest of highs, including historic runs by the Havre High wrestling team, the HHS swim teams, and most recently, the great HHS girls basketball teams, among many other programs who have won countless divisional and state championships.

But, while all those things have brought plenty of smiles to his face, Murphy emotionally admitted that, it's the relationships he's built over the years, that will always matter the most.

"Coaches have their teams," Murphy said. "Well, the coaches I've worked with over the years, you all are my team, and I have been so fortunate to be a part of that team. I feel so lucky to have been able to share in their passion, their triumphs and their heartaches. So many kids come and go through our halls over the years, and they are special, and you just hope you've done whatever you could to make a difference in their lives. But, the relationships I've had with the coaches as the AD here, that's something very special to me."

He's had a great relationship with another very important part of his team, who is also retiring, athletic department secretary Ginger Chagnon.

"I've had the same secretary for 18 years, and I don't know if I could work with anyone else," Murphy said.

At the end of the day, he reiterated that, working with all of the great coaches he's had over the years, that was the most enjoyable part of his job. And while he has impacted them in so many ways, and had a hand in helping make them all better coaches, he says, it's been the same in reverse, and again, it's the relationships with all of his coaches, past, and present that he's going to miss the most when his incredible career as an AD comes to an end in June.

"I've had so many special times in this job, I could never single one out," an emotional Murphy said. "Again though, it's the coaches, they are so dear to my heart. I've learned so much from them, more than any of them probably realize. All of the coaches I've worked with, they all have made me a better person, and certainly helped make me a better AD. It's because of all of those coaches, that I can look back on my time as AD and smile. They all made this job the amazing job that it has been for the last almost 20 years."

And now Murphy's time as AD is almost at an end. And while he said getting to a place where he could feel good about retiring wasn't easy, now that he's there, keep smiling Dennis, because, the impact you've had on coaches, student-athletes, students, Havre High, and on Havre in general, it's as profound and as important as anyone who has been at HHS in a long, long time. In other words, keep smiling Dennis Murphy, because you did what you set out to do, you made a difference, and your contributions to Havre High will not go away, they'll be eternal.