Murnion looking forward to career in the Havre Police Department 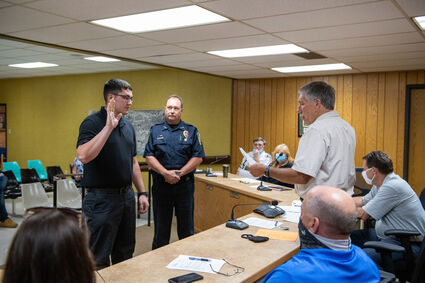 Brandon Murnion is sworn in as a new officer for the Havre Police Department by Mayor Tim Solomon as Havre Police Chief Gabe Matosich looks on.

Former Hill County Detention Officer Brandon Murnion, 24, was sworn in as a new probationary police officer for the Havre Police Department at a City Council meeting Monday evening, and he said he's looking forward to his time serving the community.

Murnion was was raised in Chinook where his two brothers, one older, one younger, still live along with his parents who, he said, have supported him in his pursuit of becoming an officer.

"They've fully supported me, this is what they know I've always wanted to do," he said.

He said he has a couple of cousins in the Bozeman Police Department...