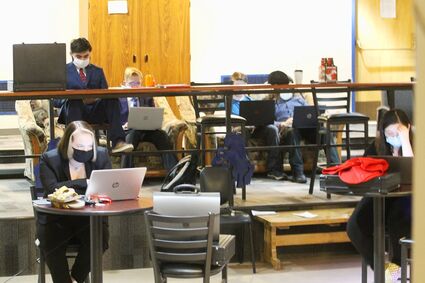 The members of Havre High School's speech and debate team prepare Friday at the high school to compete at the first Class A tournament of the season, the weekend of Montana's first-ever online tournaments.

The competition had some difficulties with glitches and cutting in and out while competitors were talking, and some competitors - none from Havre - were having difficulty using the program provided by the National Speech and Debate Association at all Friday while they tried to work out bugs.

Leeds said much of that was likely due to an overloaded system. More than 110 schools were using NSDA program this weekend to hold competitions.

"Once you get past the technical difficulties, it is actually super convenient that we don't have to get on a bus at 4 o'clock in the morning to compete at 8 o'clock. It's kind of strange to sit and talk to a computer, especially because you are expected to make eye contact with the judges which is kind of hard when you're just staring at a camera," Havre debater LillieAnn Mecklenburg, a four-year competitor for Havre said. "Other than that, the actual competing part goes really smoothly other than expected technical difficulties."

Normally, Leeds said, Montana speech, drama and debate starts in October and continues to divisional and state the last two weeks in January. In February, a national qualifier is held where schools can send students to compete to qualify for NSDA's national tournament in June.

Normal weekend tournaments consist of getting on a bus, or hosting a home tournament, and competing tournaments that typically have a mix of Class A and BC and sometimes AA competitors from the region.

Preliminary rounds are held to set up the rankings and determine who breaks into the elimination rounds. The students are split up into sections for the different events, then go into rooms with a single judge who scores the round. The top-ranked competitors then break into the outrounds, with students' combined ranks in the preliminaries and outrounds used to rank the top eight competitors in each event.

Class AA does not have a divisional tournament and the schools select their own teams for state.

At the start of the school year, Montana High School Association said the speech, drama and debate season would proceed as normal, with practices and live competitions starting in October.

Then, Sept. 21, the MHSA board voted, due to the COVID 19 pandemic, delay the season until December. MHSA at that point did not have any procedures to handle multiple schools competing in one location to mitigate the threat of COVID-19

The teams were also told that practice could not be held until December as well, Leeds said, and the teams would be doing their first practices days before the first competition.

The teams then were told they could start practicing In November. Leeds said he then had to get the team back together and organized to begin practices.

NSDA, formerly known as the National Forensic League, knew it could not hold its national tournament live in June due to the pandemic, so it worked with universities and partners to develop a program that operates similar to Zoom to run the tournament. More than 7,000 students and judges used the program during the week of the national tournament in June.

The program was modified to be more user friendly for smaller schools and smaller tournaments and offered to schools nationwide to use.

Students, coaches and judges must register with the program, and everything is assigned for the tournament on this platform. The tournament runs the same way, with preliminary rounds, and then you go into out rounds. The main difference with the online format is each student and judge logs in and when the student is ready to compete, they turn on their camera and microphone and perform. When the student is done, they turn off their camera and microphone and the next student follows the same steps. At the end, the judge completes and files an online ballot.

The system is planned to be used for the rest of the season and the national qualifier tournaments, of which Montana has two, one in the east and one in the west.

Leeds praised The Montana Forensic Educators Association for working since the beginning of October setting up the programs and systems to use for the online the tournaments.

Coaches had an opportunity to login and test the system two weeks ago and the association has been working to fix the problems discovered during that meeting. More issues were discovered in the first online tournaments last weekend, and more changes are planned, which will probably continue as the season progresses.

A different kind of season

The tournaments were different for more reasons than being online.

Leeds said having a tournament Saturday with all class A teams, rather than a mix of 10 to 20 schools of different classes, changed the aspect of the tournament.

"It's almost like super divisional," Leeds said. "You're competing against every class A competitor in the state, so it's a really high-powered, tough tournament."

He said he would rather have live competitions, but is glad this system is available.

"I'm really glad we have this opportunity because at least we are competing," he said. "I would rather we were face to face because it is a whole different kind of competition talking to a camera and watching on a screen. This is better than nothing."

He added that many couldn't do online competition, like football, wrestling or basketball.

"So, we're really lucky that we have this opportunity," Leeds said.

Impacts on the team

Leeds said the pandemic and the online competition has impacted the team in other ways. So far, about one-third of the students who competed last year are competing, with some of last year's competitors saying they don't want to compete in the onilne format.

Leeds said he hopes more students come back including as other conflicts are resolved.

Practice is being held as normal with COVID-19 restrictions implemented, but Leeds said he does plan on having the team practice in an online practice room through the NSDA system as the season goes on.

The season also has impacted judge requirements. Leeds said, in a normal season, the host school provides the judges, but this year, with the online format and people being able to judge from any location, each school has to provide some judges for each tournament.

He said people who are interested in judging - Havre will need to provide some judges every weekend except holidays through the national qualifier in February - can email him at havrespeech@gmail.com or go to an online signup form at https://bit.ly/HavreSpeechJudgeOnline .

Leeds said the judges from last weekend seemed to have no problem using the system, and added that a short video tutorial on its use is available.