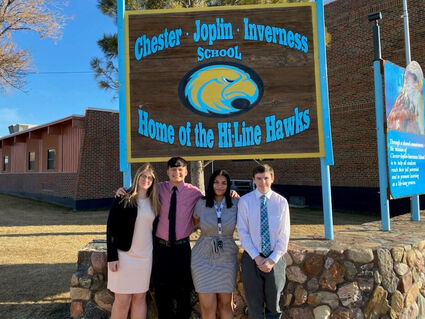 CJI served as the virtual host for the divisional tournament, which saw teams from seven Class C schools and six Class B schools compete to qualify for the State BC speech and drama tournament hosted by Huntley Project.

The Hawks were once again led by senior Emma Wickum, who claimed her second consecutive divisional championship in extemporaneous speaking. Wickum has qualified for state each of the last four years.

Senior Cain Cole finished second in memorized public address. Cole lost a heartbreaking three-way tiebreaker for first place in his event. He will compete at the state tournament for the second time after qualifying for state last year in dramatic interpretatiom of literature.

Freshman Martin Fulbright finished second in informative speaking which earned him the right to compete at the state tournament.

As a team, the Hawks had their best finish of the season, winning first place in Class C Speech with 31 points.

North Star finished second in Class C speech with 25 points and Power was third with 15 points.

In Class B drama, Choteau claimed the championship, followed by Malta and Cut Bank.

The Hawks conclude their season this weekend at the state BC tournament.