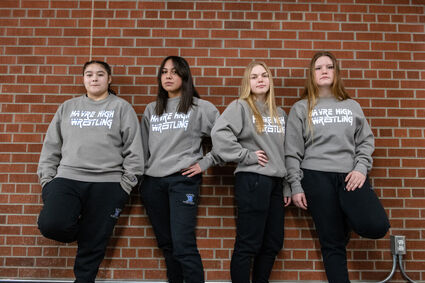 The four members of the first-ever Havre High girls wrestling team pose for a photo before heading off to this weekend's inaugural All-Class State Girls Tournament in Billings. Girls wrestling was made an official sport by the Montana High School Association last spring.

High school girls wrestling is only in its first year as a sanctioned sport in Montana. While girls were able to compete in the sport alongside the boys, this will be their first year in a league of their own, so to speak. To commemorate the inaugural season, the first all-classification girls wrestling tournament will be held at Lockwood High School in Billings Friday and Saturday.

One of the schools participating in the tournament will be the Havre High girls wrestling team, which is also in its first season as a program.

"It'll be interesting because it's the first girl's tournament ever and the first of our wrestling postseason," said Havre head coach Beau LaSalle. "Girls are excited. We're excited to take them down there. We haven't got a ton of girl matches so it'll be good to see them against more girls and how they do in a tournament format."

The Havre High girls wrestling team is made up of four freshmen. Two of the Blue Ponies' wrestlers, Brooke Nelson and Maleigha Fuzesy, will compete in the 126-pound weight class. Clara Laird will wrestle at 170 and Aaliyah Stiffarm will compete at 205.

The Ponies will be one of many teams at the tournament as girls wrestling has seen rapid growth throughout Montana. In all, 48 schools qualified for the tournament for a total of 169 girls hitting the mats. The tournament was originally only going to have seven weight classes for wrestlers to compete in, but the influx of participants forced the tournament to expand it to 11 classes: 103, 113, 120, 126, 132, 138, 145, 152, 170, 205 and 285.

The top-ranked wrestlers that Nelson and Fuzesy will compete with in the 126-pound weight class include Lily Grismer from Cascade, Amia Kern from Sidney, Bella Arriaga from Kalispell Flathead, Evija Cagle from Billings Skyview, Jacey Gorder from Baker and Bella Hernandez from Lockwood.

At 205, Stiffarm will compete with highly ranked wrestlers such as Kassidee Savaria from Billings Skyview, Lucy Libbey from Kalispell Flathead, Syke Smith from Cascade, Haylee Fetters from Cut Bank and Shannon Todd from Kalispell Glacier.

Despite the growth of girls wrestling across the state, there are still not enough wrestlers for divisional tournaments or state qualifiers. So, the tournament this weekend will serve as the only postseason tournament for girls wrestling.

Even though the HHS girls had never wrestled in a tournament before, LaSalle is confident that they will carry on the success that his boys teams have had in tournaments.

"I expect them to go down there and win some matches and put themselves in a position to get on the podium. I think they've got the potential to do it and we just got to put it together in a tournament format," LaSalle said. "We haven't got a tournament yet, but historically at Havre, we've done pretty well in tournaments, so hopefully the girls continue that."

The Ponies will hit the mats for the first all-class girls wrestling tournament starting this Friday at Lockwood High School in Billings.