Northern ready to light up the spring

Lights have done all they can to keep building during a year without football games, but now it's time to get back on the field for real 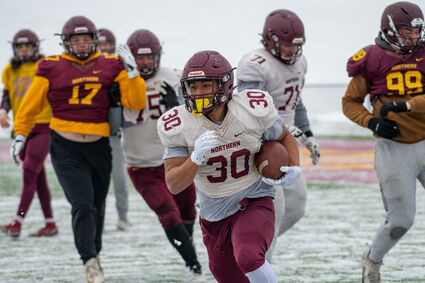 After missing the entire 2020 season due to the coronavirus, the Montana State University-Northern football team has been willing to practice in ugly winter conditions the last couple of weeks in order to get ready for a four-game spring Frontier Conference season. The Lights are scheduled to open that season this Saturday at the College of Idaho.

The Montana State University-Northern Lights just want to play football. For over a year now, they have had to watch as their brand new stadium came to life on campus, and as, time-after-time, a season they thought would come never did.

Yes, because of the COVID-19 pandemic, the Lights haven't had an opportunity to truly play football since November of 2019. Of course, they aren't alone in that as there has been no college football in Montana during that time frame.

And that's been especially tough for the Lights, of head coach Andrew Rolin, because Northern has been and continues to be a young team trying to build. And football shutting down for pretty much a year now hasn't helped the Lights achieve those goals.

Now though, that's all about to change, as a four-game spring football season is set to begin this weekend, when the Lights travel to College of Idaho. And Rolin says, his team couldn't be more excited, because through it all, the Lights have stuck together, continued to practice when they could, and continued to do all they could to keep building. And yet, there's no substitute for the real thing.

"Our players just want to go play the game they love, and play it together as a team," Rolin said. "Outside of getting an education, these guys are here to play football. They haven't had that opportunity until now. There's been a lot of preparation and team building up to this point. Now it's time to go out and execute and play together."

And despite the layoff, the Lights are looking to execute. Northern has been a work in progress since Rolin took over the program now some four years ago. And while the gains have been noticeable, the ultimate goal is to win football games, and that's something the Lights have come up short on playing in the rugged Frontier Conference. And while Northern will likely be an underdog again this spring, Rolin makes no bones about what he expects from his young squad.

"I expect us to play like we practice," he said. "That is the goal. It's hard to mimic certain aspects of a game atmosphere, but when it all boils down to it, we need to execute at a high level for four-plus quarters. That's what will always come down to in order win football games."

Executing on offense will be something the Lights are highly capable of. They return starting quarterback Brenden Medina, who threw for over 2,000 yards in 2019. Starting running back Andrez Trahan-Proctor is also back while the Lights have explosive players at wide receiver, led by four-year starter Marvin Williams Jr., and Jake Horner. Kamarie Stephens, Tyrese Rios and Dorian Miles will also be good for the Lights, as will sophomore tight end Levi Keltner. But as good as the passing game should be for Northern, the big guys up front will need to have a big season, led by veterans Tristin Willis, Trendae Umi-Tuato'o who has converted to the o-line and returning center Spencer Kolody. Senior Ronnie Chavez and transfer Bradley Mattauch round out the Lights up front.

"I believe, offensively, we are more experienced and game-ready," Rolin said. "Up front, we will be disciplined and physical. Our quarterback will be more experienced. I believe we have more explosive playmakers across the board than we've had in the past. With all that said, we still need to show up and do our job, play in and play out. Execution is the name of the game."

The Lights have the makings of being an explosive offense, but in order to really grow they also need to make big strides on the defensive side of the ball. Rolin brought in veteran DC Rich Stubler to work on that, and the Lights should also finally be a much more experienced squad on that side of the ball, as well, with defensive linemen Joe Fehr, Pat Hammond, Justin Pfeifer and Sam Sanders all returning. Dylan Wampler is also back at linebacker, while former safety Josh Rose has moved up to linebacker. In the secondary, Hunter Riley is a returning starter, and he led the Frontier in interceptions in 2019, while Damari Cual-Davis has moved from WR to CB, giving the Lights even more experience on that side of the ball.

"Different," Rolin said about how he expects the defense to be. "That's all I need to say. We need to fly to the football and get ball carriers on the ground. I'm excited to let these guys loose."

And letting loose will be a big deal for the Lights, as they look to get four much-needed games in this spring. Northern's schedule includes the opener at C of I this Saturday as well as a road game at Carroll College March 27. Then, the Light get to play a pair of home games against Eastern Oregon and Rocky Mountain College in April to wrap up the spring season - a season that Rolin said will be key to the development of his program as they head towards a return to a regular fall season later this year.

"Approach each opponent, each week, with a 1-0 mindset," he said. "We need to play fast, physical, and with unbelievable execution."

The Lights are set to travel to fifth-ranked College of Idaho Saturday. For more on the game, see Friday's Havre Daily News.