Public meetings on beaver trapping to begin next week 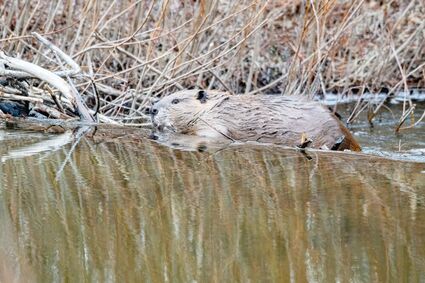 A beaver swims in Beaver Creek in 2020. The Rules and Regulation Committee of the Hill County Park Board is holding a meeting Monday at 6 p.m. to gather public comment on how beavers should be handled on Beaver Creek Park.

The Hill County Park Board's Rules and Regulations Committee will hold a meeting Monday, March 22, at 6 p.m. in the Hill County Courthouse Annex for the public to voice their perspectives on beaver population control in Beaver Creek Park and what direction the board should take in the future.

Hill County Commissioner Mark Peterson said this will be the first in a series of meetings that will take place before the committee and board make any decisions on potential changes to their population control methods and policy.

"The basic idea, in the first two meetings we'll hold, is to allow members of the public to come in and speak for two minutes and then the committee can ask question of them," Peterson said.

The issue of beaver population control in the park has long been a controversial one, with some favoring the historical model of lethal trapping as a method of keeping the population down, while others want the board to look into non-lethal alternatives.

While some in the latter category have suggested that population control may be unnecessary in it's entirety, most who speak publicly at park board meetings on the subject agree that the impact of beavers needs to be controlled in some way, lest the park's environment change significantly, but disagreeing on method rather than necessity.

Past meeting of the Hill County Park Board have been host to heated debates on the subject with proponents of non-lethal methods of beaver control arguing that trapping is inhumane and unnecessary when there are alternatives like Beaver Deceivers that, depending on the terrain, could be effective ways of mitigating damage without the need for killing the animals.

Opponents express skepticism about the non-lethal method's effectiveness and cost efficiency as well as the aesthetics of the devices used for non-lethal population control.

Peterson said next Monday's meeting will allow three people in the room at a time to present comments and the rest will have to wait outside for an empty slot to open up. Members of the public will be limited to two minutes for their testimony, he said, and he recommended that people bring their testimony in writing so the committee can refer back to it later.

After the committee hears testimony the meeting will be closed for public comment so committee members can discuss the matter uninterrupted, though Peterson said the public is welcome to listen.

"I encourage everyone to have an open mind," he said.

He said the next meeting will follow a similar model and will primarily for people who were not able to attend the first.

Subsequent meetings, Peterson said, will see experts speak on the subject which he hopes to model on a similar meeting he saw in the state capital.

"I attended a meeting a couple years ago in Helena and there were quite a few speakers there who were interesting, not all of them pro-trapping, but they gave some really good reports, and I'd like to draw on them and have them present," he said.

He said the meeting will likely host biologists from Fish, Wildlife and Parks, and other experts from nature conservancy organizations.

The dates for these meetings have not been set, but Peterson said they will likely take place once a month and the public will be kept informed of the details through the Havre Daily News and the radio.

He said reports on the committee's meetings will be given to the Hill County Park Board, but discussion of beaver population control will be handled at the committee meetings for the most part.

Peterson said the committee and board will not make any official moves until the end of the meetings, at least, and people shouldn't expect serious changes in policy for at least a year.

He said the issue is complex and will require significant discussion before any potential changes are made.

"This is an important piece of regulation we need to look at," he said.