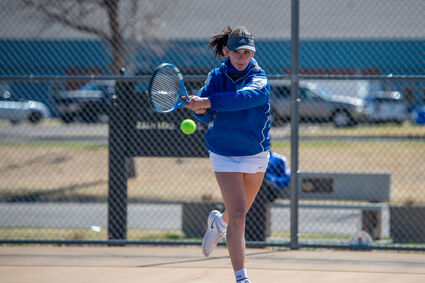 Havre High senior Talia Ralph smacks a backhand during a girls doubles match at the Havre Invitational Friday afternoon. On Friday and Saturday, the Blue Ponies hosted Lewistown, Glendive, Hardin, Cut Bank and Conrad for over 200 matches in two days at the Bill Vaughey Memorial Tennis Courts and MSU-Northern Courts.

The Havre High tennis teams didn't get to have the Havre Invitational a year ago, let alone an entire season. But fast forward one year and, despite some adverse playing conditions, the Blue Ponies made up for lost time.

Havre played host to the 2021 Havre Invitational Friday and Saturday at both the Bill Vaughey Memorial Tennis Courts and the MSU-Northern Tennis Courts. And after playing a ton of matches, HHS head coach George Ferguson said, the weekend was a huge success.

"I'm just really proud of our kids, all of them," Ferguson said. "Win or lose, they represented our program, our school and our community exactly how we want them to. They played hard, they battled some really tough conditions and tough opponents and, above all else, they accomplished our main goal, and that was to get better. Coach Brown and I saw every single one of our players who took the court be better than they were last weekend, and to do that during our only home meet, a tournament we take so much pride in, I couldn't be happier."

Friday, the Ponies took on Class A rivals Lewistown, Glendive and Hardin in official duals. The HHS boys went 2-1, defeating the Eagles 5-2, the Red Devils 6-1 and falling to Hardin 5-2. Highlights included junior Josh Currie knocking off 2019 state qualifier Carson Staiger on his way to a 3-0 day, while Josh Warp and Trenton Maloughney went undefeated at No. 1 doubles, including a huge win over a tough team from Hardin. Theron Peterson and Jared Rosgaard and Caleb Spangler and Conner McKay also won in doubles, while Colin Miller picked up a key win for Havre at No. 2 singles.

The Pony boys continued their fine play Saturday in a round-robin invitational, as Cut Bank and Conrad joined the fray. Currie again went 3-0, defeating Hardin standout Ben Noteboom, as well as Staiger for a second time in a week. Warp and Maloughney and Spangler and Mick Chagnon also went 2-0 on the day in doubles.

"Our boys took some giant steps forward," Ferguson said. "And they did it against really good competition. Some of the wins by Currie and Warp and Maloughney, those are late-season type, high-level victories, and I think when you see those guys go out and do that this early in the season, it's so exciting because I know how much better they're all going to get.

"So from top to bottom, it was a big two days for all of our boys," he added. "They were really focused. You could tell they wanted to play well at home, and knowing the level of competition was going up, they were just really locked in and I'm really proud of them."

Warp, who was playing in his final Havre Invite, had a huge weekend with Maloughney, and he was glad it happened at home, in a tournament he missed so much last year.

"It feels good, I wish the weather was a little bit better but it's just good to get matches since we didn't get to last year so I've really been looking forward to it," he said. "I really missed it."

The Pony girls also missed the Havre Invite, and they too embraced being at home over the weekend, including senior Talia Ralph, who went 2-3 on the weekend with dominant wins over Lewistown. As a team, Havre went 1-2 Friday in the duals, and did well Saturday, too.

"It's pretty nice. It's the first Havre Invite where I get to play here because I didn't get to play last season and I didn't get a freshman season either, so it's kind of nice to play here for the first time," Ralph said of the tournament. "It's really good. I got a lot of work in the offseason so it's really nice to come back in and be able to play tennis. I hope to go to state with my doubles partner Grace (Crantz)."

While Ralph and Crantz are working toward big goals this season, Ferguson is working hard to bring a very young HHS girls team up to speed, and while the Ponies didn't get a lot of wins Saturday, with McKenzie Mangold and Destiny Hernandez winning at No. 2 doubles and Kate Hemmer winning twice at No. 3 singles, Ferguson said tough competition will only serve to make the young Ponies stronger.

"Our schedule is tough," Ferguson said. "So when you have as many newcomers as we do, they're going to take some lumps. We've been through it before. But it will make them all better. All the girls improved a ton this weekend, and they did it against really good teams like Hardin, so I was proud of the steps those girls took. They're learning, they're doing a great job, and they did a great job this weekend at home."

And being at home also meant so much to the Ponies, and to Ferguson, who completed his 19th Havre Invite Saturday evening.

"It was special," Ferguson said. "I'm not going to forget this weekend anytime soon. I just missed it so much, so to be back out there calling matches, watching our kids play so hard in front of their parents and friends, to get all the support we got, and throw senior day in on top of it all, it's what it's all about. The Havre Invite is a huge weekend for us, and I'm happy all of our kids got to finally experience it again."

With the Havre Invite over, though, the Ponies will head back on the road as they travel to Cut Bank and Kalispell this weekend.

Havre Results of Round Robin Tournament 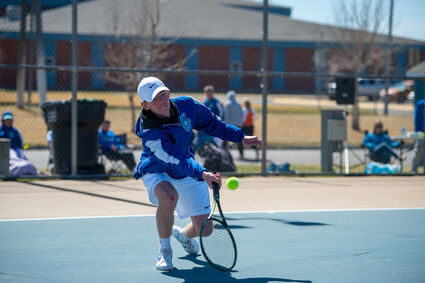 Havre's Josh Warp goes low for a volley during Friday's action of the 2021 Havre Invitational Tennis Tournament. Warp and partner Trenton Maloughney went a perfect 5-0 on the weekend.