Ponies get right back to work against Scotties 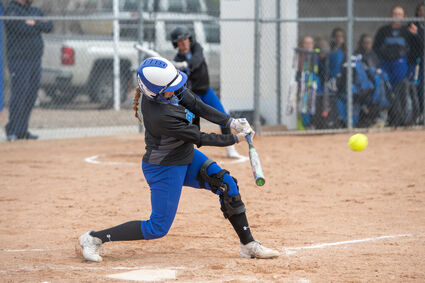 Havre High's Sammy Luvenguth smacks a hit during a Class A softball game against Hardin last Friday in Havre. The Blue Ponies return to the Sixth Avenue Memorial Field tonight to host Glasgow before heading to Lewistown Thursday.

With three straight wins at home to open the season, the Havre High softball team looks to keep that streak going tonight when the Blue Ponies host Glasgow at Sixth Avenue Memorial Field. While Glasgow has a losing record on the year, HHS head coach Tony Vigliotti believes the Scotties will bring it, because they are coached by a familiar face.

"They always bring a competitive team to town," Vigliotti said. "Their coach over there, Ryan Hartwell, was in Havre for a while so he's a good softball guy, so they'll be coached well and be a good matchup for us."