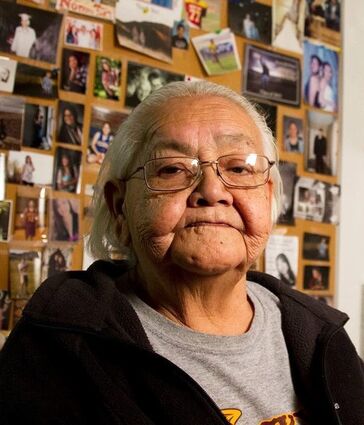 Zellah M. Nault, Spotted Down Thunderbird Wing, 78, passed away due to natural causes at Benefis Medical Center in Great Falls on Thursday, May 13, 2021.

Please visit Zellah's online memorial page and leave a message of condolence for her family at http://www.hollandbonine.com .

Zellah was born on March 10, 1943, in Rocky Boy to Four Souls and Fanny Oats. She was raised in Rocky Boy, attending Box Elder Schools. She graduated from Box Elder High School in 1961, and married Alfred "Sonny" Nault in 1963. The couple soon moved to Los Angeles, CA, remained there briefly, and returned to Rocky Boy in 1964. Upon their return, their son, Emery, was born. For around 10 years, Zellah worked as the executive secretary to the superintendent of the BIA. She lost her beloved Sonny in 1977 in an automobile accident. Zellah attended Montana State University in Bozeman from 1983 until 1985, and returned to Rocky Boy. There she worked for the Rocky Boy Schools for 34 years, retiring in 2019, as a secretary and truancy officer.

Zellah was a loving, smart, feisty woman who adored children. She enjoyed traveling, socializing, attending pow wows, and spending time with those she cared about. Music was very important to her, as were her beloved Rocky Boy Stars. She was an avid fan, and served as the advisor to the cheerleaders and pep club for over 20 years. She was easygoing, but also loved to tease and laugh. Zellah spent her time in her later years doing crossword and word search puzzles, and watching "Law and Order" and Lifetime.