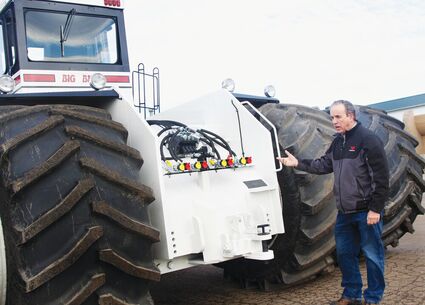 Havre resident Wally Duchscher is working to gauge interest in a potential museum he'd like to see set up in the Havre area, one devoted to the history of the now-closed local business Big Bud, creator of the world's largest farm tractor, the Big Bud 747.

Duchscher, who worked at Big Bud handling finances while the 747 was built, said the project is in very early stages of development and is still waiting on a feasibility study, but he hopes such a museum might bring more tourists to Havre and contribute to making it a destination along with other attractions like the Wahkpa Chu'gn Buffalo Jump which he hopes will also benefit from increased traffic.

Big Equipment Owner Ron Harmon is another driving force behind this museum and said he has similar hopes for it.

"I think it would be good for our community and bringing people to Havre," he said.

Big Bud was created when the Wagner company, which built the first articulated tractor with a hinge the middle, sold its production to John Deere. Wilbur Hensler and Bud Nelson lost their Wagner dealership, and decided to build their own articulated tractors.

Ron Harmon, who has been working with Duchscher to get this museum going, bought the business in 1974, he said, and continued to build Big Buds until 1984. At that point, with the shop full of partially built pre-sold tractors, a manufacturer was unable to deliver transmissions for the tractors. The shells of tractors sat for months on the Big Bud property, putting the business in serious difficulties.

In 2014 that business upgraded another Big Bud for a customer, making it into the second-largest tractor in the world.

Duchscher said he got the idea when he spoke with Big Sandy-area famers Robert and Randy Williams, who now own the Big Bud 747, and heard they were considering putting it in a museum, which he liked the idea of albeit not in their proposed location.

Duchscher said the two originally wanted to put it in a place in Montana that gets more tourists, but he convinced them that the 747 belongs where it came from.

"That museum should be here in Havre," he said.

The 747 was built when a pair of brothers, Elmer and Melvin Rossi, in Bakersfield, California, asked for a tractor that would allow them to deep rip all of their ground each year instead of doing a third each year. The 747 replaced three D-9 Caterpillar tractors the brothers had used previously.

He said the 747 is not a showpiece but an incredible piece of farm equipment.

"It's had very few problems, it did the job, and it's still doing the job," he said. "... It was a model built from scratch that worked out real well."

After the brothers stopped using the 747, it was sold to a farmer in Florida where it helped turn a large ranch into one of the largest farms in that state.

On its 20th anniversary, Harmon's company repurchased the 747 and brought it back to Havre, where it was purchased by the Williams brothers out of Big Sandy. The brothers used the tractor on the farm until about 2008 or 2009, until its 30th anniversary when it started going on tour.

Harmon said the tractor still has some touring left and will be at the Kalispell Fair later this year, then at the Farm Progress Show in Illinois.

The tractor, which was recently fitted by the Titan Tire Corporation with the largest set of ag tires ever made, still has many of its original components and is still functional, with more than 13,000 hours on it.

Duchscher said such a museum would likely house other Big Bud tractors including the first one ever made.

"The very first Big Bud ever built is in the area and it's still functioning," he said.

Duchscher said it would also likely include some Wagner tractors, as Big Bud was originally a Wagner-selling establishment.

He said everyone present expressed support for the idea, especially Robbins, whose organization has recently been focusing on Havre beautification.

He said he's looking at the former IGA building on First Street as a possible location, but is also considering the area west of Havre near North 40 and Walmart as a second choice.

Strissel said potential funding sources were discussed but the county was not asked for any direct financial support for the project.

Tuss said there is an effort to make this museum happen and people are interested, but they're still a long way from any real traction.

Duchscher said they spoke about ideas for the museum in generalities not specifics at the meeting because he doesn't want to promise anything that may not be deliverable.

He said they are looking at similar museums around the country and evaluating the sources of their success or failure to inform their own project, and Tuss is looking into possible grant funding, but the process has only just begun.

Harmon said he appreciates the community's support so far, thanking the city and county for their input as well as Bear Paw Development for their assistance.

He also praised Duchscher in particular for spearheading efforts to get the project going.

Duchscher said the Big Bud 747 will be at the North Central Montana Everything Antique Show at the Great Northern Fairgrounds June 4-6 where people can see it for themselves free of charge.

Duchscher said the show will also include an Antique Volkswagen Reunion for the first time.

He said he and others in the community are excited by the prospect because VWs tend to take a backseat to Chevys and Fords at events like this.