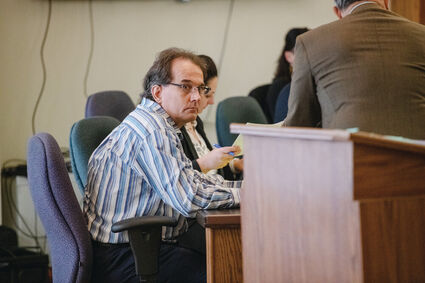 Shane Johnson sits in state District Court in Havre last Tuesday during jury selection in his retrial on a charge of negligent homicide. A jury Tuesday found Johnson guilty of the charge, stemming from the 2013 shooting death of his brother, Travis Johnson.

After only an hour and eighteen minutes of deliberation, a jury Tuesday found Havre resident Shane Johnson guilty of negligent homicide in the 2013 shooting death of his brother, Travis Johnson in a retrial that began one week ago.

Johnson had pleaded not guilty to the charge, his defense arguing that the death of his brother was a tragic accident, not negligent homicide, and the prosecution arguing that the evidence clearly showed the opposite.

Johnson had appealed his 2014 conviction in the case, arguing the court made errors in allowing the jury unrestricted access to all of the state...