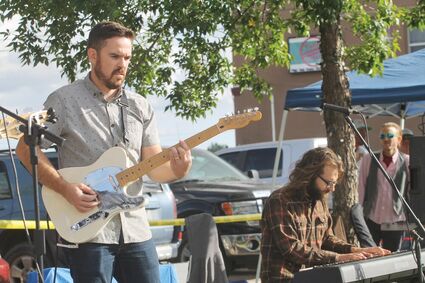 Musicians perform at Rock Lotto at Town Square September 16, 2019, during Havre Festival Days. After a year off due to the COVID-19 pandemic, Rock Lotto is again underway to be held during this year's Festival Days.

The Montana State University-Northern student radio station, KNMC 90.1 FM College Radio, is looking for performers for its Rock Lotto event during Havre Festival Days, and the sign-up deadline is Friday, Aug, 6, at noon.

Rock Lotto takes place in the fall during Festival Days.

Station Manager Dave Martens said Rock Lotto will be taking place on the Northern campus this year. He said the plan is to have the event in the Pershing Hall amphitheater.

Martens said the station hosts an event each semester. The spring event is a tribute show, in which musicians form tribute bands and dress up and play a set of music from a specific artist or band.

He also said this year's Rock Lotto will coincide with the 20th anniversary of the resurrection of KNMC.

Martens said Rock Lotto is an event in which local musicians put their name in a drawing to be randomly placed into bands for a single performance.

"Musicians sign up to play their main instrument, guitar, bass, drums, keys, horn or as a lead or backup vocalist. If a participant can play more than one instrument, they are encouraged to list their backup instrument in case too many signed up to play a particular instrument," Martens said.

"This event serves as a vehicle for musicians to meet other musicians and our hope with each passing year is for a gained sense of camaraderie amongst the musicians in our area," he added.

Martens said after the noon sign-up deadline on Aug. 6, the band drawing will be at Tip-It Bar that night at 6.

"The drawing is where the bands will be assembled for the first time. It's essentially pulling your name out of a hat and you're put in a band. There is also a song draft that will be taking place that evening after the bands have been assembled," he said.

"Typically, the song drawing involves drawing about six songs per band from the present to decades past. Instead of a drawing this year, it will be a song draft that will involve songs from each decade of rock 'n' roll going back 60 years, one decade at a time," he continued.

Martens said each band will be drafted a song from each decade from 1961 through 2001, allowing for a very diverse and sometimes challenging set of songs for the musicians to work together to learn and perform.

Martens added that many musicians at the event have never played in a band and Rock Lotto is the perfect opportunity to test the waters because it is a short-term situation, about five weeks for bands to learn their songs.

Martens said 20 people have signed up for the event so far this year. He said in 2019 that 35 people signed up to create a total of seven different lotto bands.

"The most exciting part of Rock Lotto is seeing what the musicians have been able to accomplish in such a short amount of time. Seeing the reactions from their friends and family is always a treat. The 'I didn't know Mrs. Jones played the drums!' reactions are always great," Martens said.

"We have some wonderful musicians in the community and it's a thrill to see them get out there and shred at a community event like Havre Festival Days," he added.