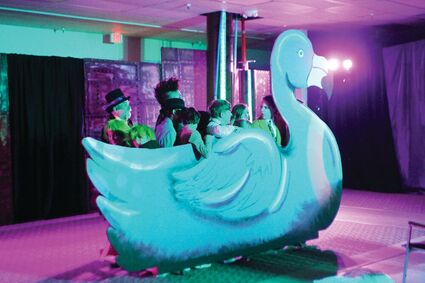 Cast members of Montana Actors' Theatre production of "Charlie and the Chocolate Factory" ride in Willy Wonka's yacht Wednesday during a rehearsal of the play.

Beginning tonight, Montana Actors' Theatre will have performances of "Charlie and the Chocolate Factory" in the former Herberger's location in the Holiday Village Mall.

"Something that makes it their own is that it's all youth produced. That's, you know, different. So it's directed by youth, and it's starred in by youth," MAT Youth Activities Director and House and Costume Manager Angela Pratt said.

"I try to stay out of it as much as I can, as far as directing. I just have them do it, but it's looking good. They've done a really good job, you know, incorporating all the things and putting together all the things that they have to do to get a production and it's pretty cool," she added.

Pratt said the cast and crew have pretty well adapted to rehearsing and performing under pandemic conditions, but there have still been some challenges along the way.

For example, MAT still has yet to put on its performance of "Mamma Mia," but the stage has been built and is taking up space at the Little Theatre at Montana State University-Northern, meaning rehearsals for and production of "Charlie and the Chocolate Factory" must take place at Holiday Village.

"We can't be on our stage. We have to do it here. Luckily, we've got an amazing mall staff that made it possible for us to be up here so that we could even do this because normally, we would do it on our own stage," Pratt said.

Pratt said rehearsals for "Charlie and the Chocolate Factory" started in the former Creative Leisure building before being moved to the former Herberger's location, which has been transformed into the performance space.

The MAT website says the production has limited chairs available so people are asked to bring their own if possible. 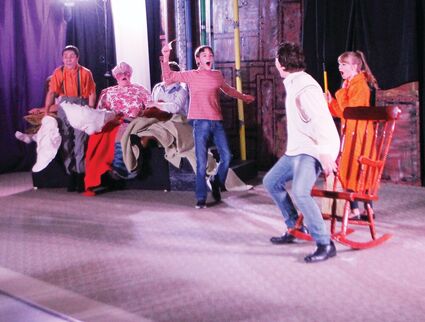 Pratt said the cast is very excited to showcase its hard work.

"They are very excited to finally get it up and going. It's still crazy that it's happening already. But they're excited to get it going. And they're ready," Pratt said.

Tickets are $10 for adults, $8 for students, seniors and military members and Montana State University-Northern students can attend for free with a valid university I.D.

Performances will take place tonight through Saturday and Aug. 5-7, all at 7 p.m.

Tickets are available online through the MAT website at http://mtactors.com .