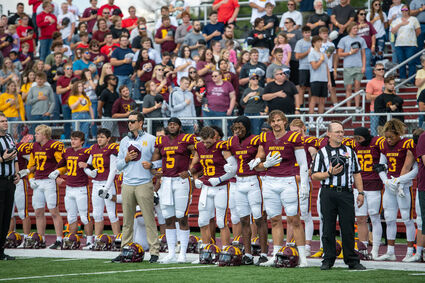 The Montana State University-Northern football team stands in front of their home crowd before their home opener against College of Idaho at Tilleman Field last week. The Lights' upcoming game at Southern Oregon University was rescheduled due to poor air quality caused by fires in the Ashland, Oregon, area.

Heading into this weekend's game on the road against Southern Oregon University, the Montana State University-Northern football team looked to pick up their first win of the season. Unfortunately, the game has been postponed due to poor air quality caused by fires near Ashland, Oregon.

Fortunately, both teams had a bye week scheduled for the following week so the game will be rescheduled for Sept. 11 at Southern Oregon. Both teams were looking to win their first game of the season after suffering losses in their season openers. MSU-N opened the season with a 42-14 loss to College of Idaho...