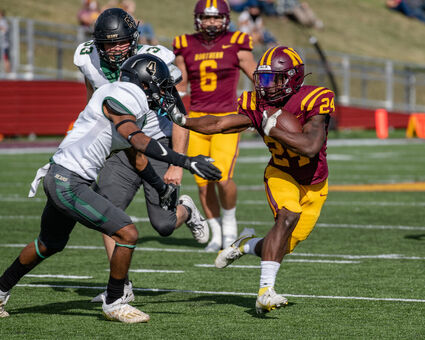 After Andrez Trahan-Proctor got injured during the spring season, the Lights had been looking for a running back to lead them this fall. Coming into the season, Izayah Boss emerged as the team's No. 1 running back but it took him a while to get in a groove.

In their first game against College of Idaho, Boss ran for 50 yards on 15 carries with his longest rush going for nine yards. He also caught a pass for one yard against the Yotes. In their game against Southern Oregon University, Boss only ran for 30 yards, nearly half of them coming on one carry. However, he caught two passes against the Raiders, including a screen he took 38 yards for a touchdown.

Boss began to find his footing on the ground in the Lights' strong second half against University of Montana, Western. After the Lights trailed 28-0 at halftime, he scored his first two touchdowns of the season on the ground to help the Lights get back in the game. He finished the game against the Bulldogs with 122 rushing yards on 22 carries.

Against RMC, Boss had his best game of the season as he ran for 158 yards and a touchdown on 5.9 yards a carry. When Boss picked up big yards on the ground to provided a spark for the Lights offense when they needed it the most. On his first carry of the day, he ran for 48 yards to set up the Lights' first score of the day. He also ran 13 yards for his only score of the day to give MSU-N a lead in the first quarter.

In their season opener against C of I, the Lights were right there as they trailed 21-14 early in the fourth quarter. However, a pair of tipped passes that were intercepted by the defense gave the Yotes good field position that they used to score and put the game out of reach. Against UMW in their own territory, the Lights fumbled twice and failed on a fake punt in the first half. The Bulldogs used these mistakes to build a sizable lead the Lights could not overcome.

While the Lights made some mistakes through the course of their game against RMC, they were not costly. The first mistake came near the end of the first half, when Kaymen Cureton fumbled the ball in MSU-N territory. The MSU-N coaching staff argued his hand was coming forward to make it a forward pass, but the officiating crew said his hand was empty and he pushed the ball forward. Regardless, the MSU-N defense stood strong as they forced the Bears to attempt a field goal that they missed.

In the third quarter, the Lights went for it on fourth and one just past midfield. However, a bad snap forced Cureton to just fall on the ball. Even with good field position, the MSU-N defense stood strong and they forced a punt.

The Lights' mistakes did hurt them when it mattered most. With a 28-24 lead with just over two minutes left in the game, the Lights punted back to the Bears. Despite punting well through most of the day, this one only went for 10 yards to give the Bears great field position. A defensive pass interference gave the Bears 15 yards to start the drive and they took the lead four plays later.

Once the Lights got the ball back with just over a minute and half, they continued to make mistakes. Their drive started with a holding penalty that set them back 10 yards. Cureton then tried to make a play down the field but it was intercepted to end the Lights' hopes.

Through the first four games of the season, sophomore defensive back Isaiah Paul has made an impact for the Lights with his opportunistic defense. In their season opener against C of I, Paul picked off quarterback Jack Rice in the end zone to keep it a one-score game in the second half.

In their game against UMW, Paul snagged two interceptions on passes from Jon Jund. Paul returned one of those interceptions 45 yards for a touchdown to help the Lights get back in the game in the second half.

On Saturday against RMC, Paul again intercepted a pass that went a long way for the Lights. After he returned the pick to the RMC 43-yard line, the MSU-N offense capitalized on the turnover to score a touchdown for an early lead in the game.