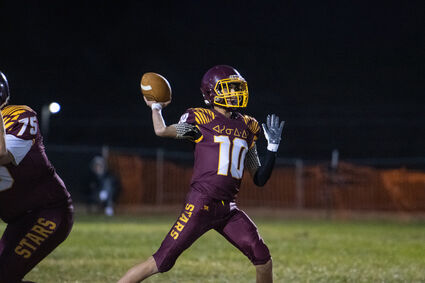 Rocky Boy quarterback Kellen Colliflower throws a pass in their home game against Belt this past Friday night. The Rocky Boy 8-man football team played two games last week, a 74-24 loss to Fort Benton on Monday, and a 64-26 loss to Belt on Friday.

Since a previous game was postponed, the Fort Benton and Rocky Boy 8-man football teams had to play two games each over the course of last week. The Longhorns and the Stars first faced off last Monday which the Longhorns won, 74-24.

Fort Benton then returned home for a Friday-night game against Choteau. Even though they played earlier in the week, the Longhorns showed no signs of slowing down as they defeated Choteau, 47-26.

The Longhorns got their running game going early with Andrew Ballytine leading the charge. In the first two quarters, Ballyntine scored three touchdowns on the grou...