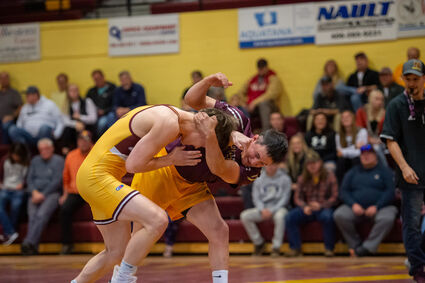 Former Montana State University-Northern great, and current Havre High head coach Beau LaSalle, right, wrestles in the Northern Alumni Dual back in 2019. The dual is back this fall, as the Lights take on the Alumni Team Saturday at the Armory Gymnasium.

The match between current Lights and former Northern stars annually kicks off MSU-N's new season, and this Saturday will feature some of MSU-N's best, especially from the Thivierge era.

This year's Alumni Dual will feature almost all Northern wrestlers who competed for Thivierge in his more than a decade at MSU-N. Included in that list is former NAIA...