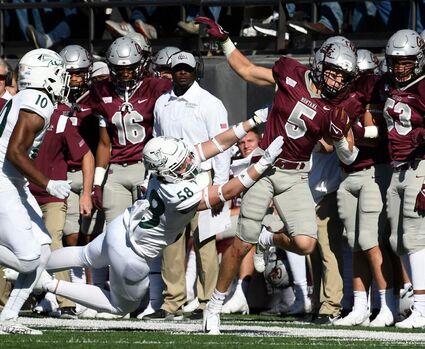 Montana's Garrett Graves runs back a kick during Saturday's Big Sky game against Sacramento State at Washington-Grizzly Stadium in Missoula. The Hornets upset the Grizzlies 28-21.

OGDEN, Utah — After allowing a 97-yard touchdown drive on Weber State's opening possession, No. 9 Montana State's defense clamped down to hold the No. 18 Wildcats to just 172 yards the rest of the contest and held on late for a 13-7 victory at Stewart Stadium on Friday. The Bobcat football team improved to 6-1 overall and 4-0 in Big Sky Conference play with the win.

It took Weber State a little over 4 minutes into the game to go up 7-0 after a nine-play drive ended with a 9-yard rushing touchdown by Josh Davis. However after a 3-and-out on its opening drive, the MSU offense drove 78 yards in 10 plays and capped off an over 5-minute stretch with a Matthew McKay 4th-and-goal sneak into the end zone.

The end of the first quarter saw a score of 7-7 and it remained that way through the entirety of the first half. Both defenses controlled the line of scrimmage, with MSU's Ty Okada coming up with a critical fourth down pass breakup as Weber State drove into MSU territory at the start of the second quarter.

It was a tale of defensive strength again in the second half, but Montana State's side was opportunistic and took advantage of turnovers.

The Wildcats worked their way into Bobcat territory following MSU's first possession of the third quarter, but MSU's Daniel Hardy stripped the ball out of the hands of WSU quarterback Bronson Barron on a 3rd-and-long play. Linebacker Troy Andersen ended up plucking the recovery out of the air and gave MSU the ball at the 50.

A McKay completion to Treyton Pickering moved the chains once before the MSU offense stalled. Blake Glessner came on and converted on a 46-yard field goal to put the Bobcats ahead 10-7 with 7:35 remaining in the third quarter.

The next possession again saw Montana State take advantage. Weber State fumbled the ball on its first play of the ensuing drive and Callahan O'Reilly recovered it at the Wildcat 33-yard line. Two Isaiah Ifanse carries completed a first down for MSU before bringing Glessner back out. He would knock in a 32-yard attempt and the Bobcats edge increased to 13-7 with 3:50 to go in the quarter.

Montana State's defense continued to bring pressure and eventually forced three consecutive punts. The fourth quarter saw the Wildcats move ball to MSU's 31, but a fourth down pass was covered up by Tyrel Thomas and Tre Webb to force a turnover on downs. An MSU 3-and-out would lead to another Weber State opportunity, but the Wildcats' drive stalled out and a dropped pass finished off a back-to-back turnover on downs.

The Wildcats had a final opportunity as they took over after a Bobcat turnover on downs at their own 47-yard line with 2:20 remaining. A sack by Sebastian Valdez and Hardy moved WSU back to open the drive, WSU then had an incomplete pass, and finally a third down solo sack by Hardy forced the home side to punt despite less 2 minutes left on the clock.

MSU eventually sealed the game as McKay completed a 14-yard rush on second down to move the chains and Weber State ran out of timeouts.

Weber State out-gained Montana State 269-222 in total yards, but the Bobcats took care of the ball as MSU took advantage of WSU's two fumbles lost in the contest.

Ty Okada finished with a Bobcat-high 11 tackles and Andersen followed with 10. Hardy wound up with three sacks, while Valdez and Amandre Williams had 0.5 sacks apiece. Okada, Thomas and O'Reilly each registered a pass breakup. Brody Grebe and Ben Seymour each recorded tackles for loss.

MSU did most of its work on the offensive side on the ground as the Bobcats outgained the Wildcats 146-54. Ifanse led the Bobcats with 81 yards rushing.

The Bobcats return to Bobcat Stadium next Saturday, Oct. 23, for the first of their final two home games of the season. MSU will be hosting Idaho State with kickoff set for 1 p.m.

MISSOULA — Montana's comeback attempt came up just short Saturday afternoon, as the Grizzlies dropped a 28-21 decision to the Sacramento State Hornets. The Hornets put together a complete performance, outgaining Montana by nearly 200 yards to pick up their first-ever win at Washington-Grizzly Stadium.

The No. 5 Grizzlies fall to 4-2 overall and 1-2 in the Big Sky with the loss, which also snapped a 12-game winning streak at home. Montana fell behind on the first drive of the day and would never held a lead in the loss.

"I'm really disappointed, to say the least. It wasn't good enough by us," head coach Bobby Hauck said. "We're stuck in first gear, we've got to get out of that, and we've got to do it pretty quick here."

There were several bright spots for the Grizzlies, but they were unable to get momentum on their side at any point in the game. They would come back to tie the game late in the third quarter, but every time Montana looked to get back into it Sacramento State would answer.

Sacramento State gained 456 yards and converted 9-of-15 third-down attempts, while Montana converted just 4-of-14 third attempts. The Griz struggled to move the chains all day, going three-and-out four times and turning the ball over twice early in drives as well.

The Grizzlies did force three turnovers. Patrick O'Connell forced a fumble, Justin Ford had an interception, and the Hornets mishandled a punt. But Montana was unable to score off any of them and coughed it up twice themselves, leading to seven points for Sacramento State.

"It was just not good enough by us. We've got to fix it and do better," Hauck said of failing to capitalize on the turnovers. "Ultimately, that comes back to me. I've got to get them to do better. Right now, we just are not clicking, and it's hard to take."

Kris Brown had an efficient day at quarterback, completing 81 percent of his passes for 188 yards. He also had a big day on the ground, running for two touchdowns. The longest pass play of the game was just 16 yards as Sacramento State's defense kept everything in front of them on the day.

Junior Bergen led the Grizzlies in rushing with 47 yards, including a 20-yarder, but Montana managed just 84 rushing yards as a team. Sacramento State ran a balanced offense, rushing for 154 and passing for 302. Robby Hauck led the team with 13 tackles, and Jace Lewis added nine, but a Montana defense that typically lives in the opposition's backfield struggled to get to the quarterback. They finished with just one sack and four tackles for loss, as the Hornets did well getting the ball out quick.

The Hornets came out firing, driving down for a 75-yard score on the opening possession of the game. They worked it well through the air, completing five of six pass attempts for 52 of the yards.

Brown created the first big play of the day for Montana, keeping it on a read-option and busting a 22 yard gain. A late hit on the Griz quarterback moved Montana deep into Hornets territory. He then converted a long third down with a connection to Akem, setting the Griz up inside the 10 to start the second quarter. Montana would get their first points with a field goal, cutting the lead to 7-3.

Sacramento State gambled against the Grizzly defense on the next drive, going for it on fourth down from midfield. A deep pass was intercepted by Ford, his fourth in as many games, to give the ball back to the Griz.

The turnover led to nothing for Montana, and Sacramento State took their next drive down the field in under three minutes to take a 14-3 lead. So often this season, big special teams plays have made the difference for the Grizzlies, and it looked like that would be the case again. The Hornets smartly kicked away from Malik Flowers, but his return partner Garrett Graves made them pay, taking it back 41 yards near midfield. The Grizzlies couldn't get the offense going, however, and were forced to punt near the end of the half.

The Griz defense got a stop, and once again a big special teams play looked to turn the tide. Keelan White returned a punt for what appeared to be a touchdown, but flags brought it back to Montana territory.

The Grizzly offense responded with another scoring drive, but was once again kept out of the end zone. Macias drove home a 31-yard field goal as time expired in the first half, cutting the lead to 14-6 at the break.

Montana received to start the second half but fumbled two plays to give Sacramento State the ball just outside the red zone. The Hornets took advantage, scoring three plays later to take a 21-6 lead.

Backs against the wall, Montana responded. Brown put together a perfect drive, completing all three passes and rushing for the first Grizzly touchdown of the day. Bergen, who had an electric run that he nearly scored on to set up the TD, ran in the two-point conversion to cut the lead to 21-14.

The big play defense then delivered, with Patrick O'Connell chasing down the Hornet quarterback and forcing a fumble from behind that the Grizzlies were able to recover. The Griz were unable to take advantage, but the defense once again came up big.

O'Connell came free on a blitz, hammering the quarterback and forcing another Hornet fumble. They were able to recover but had to punt. This time, there were no flags on the field for a massive return from Keelan White. He caught the punt off a hop, then bounced outside for a 31-yard return into Hornets territory.

Brown then created another big play on his feet, keeping a read option and scoring from 23 yards out to tie the game up at 21-all late in the third quarter. Sacramento State responded with another quick drive and a 24-yard touchdown pass to retake the lead 28-21.

The Grizzly offense stalled, but Montana caught a huge break when the Hornets muffed a punt that the Griz recovered inside the red zone. Brown looked for the quick hitter on Montana's first offensive play, throwing to Akem in the endzone, but the pass was intercepted on the two-yard line.

Montana went three and out on their next drive and didn't get another chance until there was 2:11 on the clock. On the final drive of the game, the Hornet defense would get to Brown in the backfield twice to turn the ball back over and end the game.

The Griz return to the road to face rival Idaho.