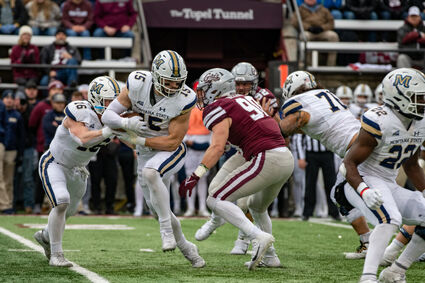 Montana State's Troy Andersen, left, plays offense in last Saturday's Brawl of the Wild in Missoula. Andersen was named Big Sky Defensive Player of the Year on Tuesday, while 13 total Bobcats and 14 Grizzlies earned All Big Sky honors for the season.

With the Brawl of the Wild last Saturday, the 2021 Big Sky Conference football season came to an exciting end. And while both the Montana State Bobcats and Montana Grizzlies have plenty to play for still, with the upcoming FCS playoffs, the league handed out its annual awards on Tuesday.

In total, 14 Grizzlies and 13 Bobcats landed on the Big Sky All-Conference Team.

MSU was led by senior linebacker Troy Andersen, who was named Big Sky Defensive Player of the Year. Andersen had 111 tackles, two sacks and two interceptions in his final season in Bozeman.