HHS girls fall in yet another OT thriller with Billings Central 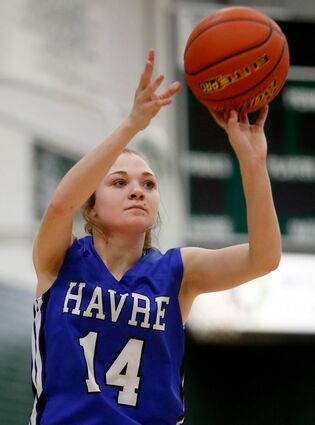 Havre High's Jade Wendland shoots during Saturday's game against Billings Central in Billings. The Ponies lost to the Rams 55-54 in overtime.

On Saturday afternoon, the Havre High girls basketball team faced a familiar opponent in the Billings Central Rams. The two teams faced off twice in last year’s postseason, including the state championship game that the Blue Ponies won, 64-60, in overtime. But this time, the Rams grinded out a 55-54 overtime win over the Ponies in Billings.

“It was a great game,” HHS head coach Dustin Kraske said. “We played really well. I was pleased with our efforts. We had a few moments of really good basketball and we’re going to work to focus on getting more moments of that.”