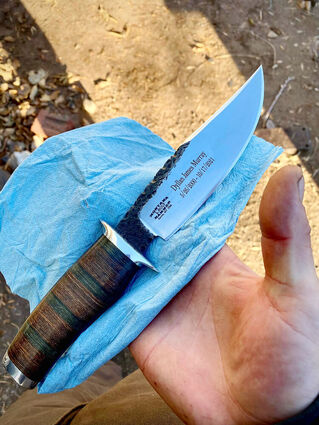 A hand-crafted knife made in memory of Dyllan Murray by Lincoln Holt is displayed. The knife was auctioned off to start a memorial scholarship in honor of Murray, who died Oct. 17. The winner of the auction, Wendy Hilty, donated the knife to Murray's father, Dave Murray.

This past week, Montana State University-Northern received a gift in remembrance of Dyllan Murray of Havre. The gift was given by Lincoln Holt, also of Havre. Holt, a friend of the Murray family, is owner of Montana Hammer Knives and he handcrafted a knife which he auctioned and raised $600 to support this gift in memory of his friend.

The auction winner, Wendy Hilty, in turn donated the knife back to Dyllan's father, Dave Murray.

"The level of community we have here on the Hi-Line never ceases to amaze me," Holt said. "We have some incredible people here, huge hearts read...