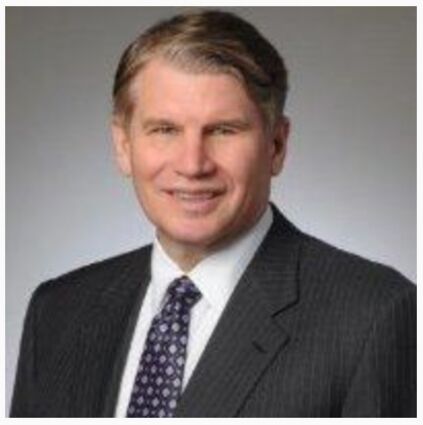 Verne O. Sedlacek died December 10, 2021, after suffering a heart attack while vacationing with his wife in the Caribbean. He was 67 years old.

Verne was born in Havre on May 20, 1954, to Vernon and Signe (Martinson) Sedlacek and attended Havre Public Schools. He graduated from Havre High School in 1972. During his time at Havre High, he was a starting offensive tackle for the Blue Pony football team that won the Class A State Championship in 1970 and that was the Class A State Runner-Up Team in 1971. He was also a member of the Havre High Boys' Track & Field Team that won the Class A Track & Field State Championships in 1971 and 1972, competing in several field events. He was a member of the Havre High debate team and had leadership roles in numerous clubs and in student government activities.

After graduating from high school, Verne attended Princeton University, in New Jersey and graduated from Princeton in 1976 with a bachelor's degree in economics. Immediately after graduating, he was employed by Arthur Andersen & Co. in New York City in their Audit Division. During his time working at Andersen, Verne earned his certified public accountant designation.

While at Princeton, Verne met Maura Mitchell, and they were married on the Princeton campus in October 1981.

Many of Verne's audit clients at Andersen were investment and Wall Street firms, which lead to his being hired in 1983 by Harvard Management Company, the organization that manages Harvard University's endowment, as executive vice president and chief financial officer. Verne and Maura relocated to Boston, Mass., from metropolitan New York City at that time.

In 1997, Verne was hired as the president of John W. Henry & Company, a large alternative investment management business based in Westport, Conn. Verne and his family relocated to Westport, Conn., at that time.

In 2003, Verne became the president and chief executive officer of Commonfund, a not-for-profit organization providing investment management, advisory and consulting services to nonprofit institutions (primarily colleges and universities) in nearby Wilton, Conn., and led the organization during the very tumultuous real estate and financial crises of 2008-2010.

Verne retired in 2015 but remained active on several boards of directors for financial, investment and educational organizations and provided investment and endowment management consulting services to a few select organizations. Verne had been on the board of the Chicago Mercantile Exchange, and at the time of his death, he was a senior fellow with the M.J. Murdock Charitable Trust in Vancouver, Wash., and served on the boards of the Association of Governing Boards of Universities and Colleges, the Thrivent Mutual Fund Complex and Valparaiso University. He was a member of the Dean's Advisory Board of the Ancell School of Business at Western Connecticut State University and served on the Investment committee of The William Penn Foundation. He was also a member of the board for the Museum of American Finance in New York City.

He was highly respected in the investment and endowment management fields for his insights and ability to identify and anticipate important trends affecting those industries. In 2013, the National Association of College and University Business Officers awarded Verne the Rodney H. Adams Endowment Award for his outstanding individual contributions to professional development activities in the area of university endowment and investment management.

Verne was a capable, competitive and determined man who had a warm and loving heart and a quick wit, fierce loyalty to his family and friends and to those with whom he worked, and was a devoted husband and father. He also maintained a deep emotional connection to Havre and Montana, a connection exemplified by his efforts in recent years to re-establish and re-fund the Vern & Sig Sedlacek Memorial Scholarship Endowment at Montana State University-Northern, which awards a scholarship annually to an MSU-Northern student from the Montana Hi-Line.

He is preceded in death by his parents, Vernon and Signe.

Funeral arrangements are still pending, but a memorial service is being planned for the week of January 3, 2022, in Westport, Conn.

Memorials to honor Verne may be sent in his name to the Vern & Sig Sedlacek Memorial Scholarship Endowment in care of the Montana State University-Northern Foundation. Condolences and memories of Verne may be sent to his brother, Stuart, at [email protected] or Stuart Sedlacek, 16126 Cog Hill Drive, Northville, MI 48168.