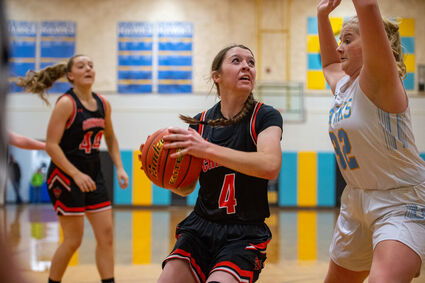 Chinook's Bree Swanson, left, drives towards the basket during a District 9C game at Chester-Joplin-Inverness last Tuesday. The Sugarbeeters beat the Hawks, and went a perfect 3-0 to start the new year.

As Hi-Line girls basketball teams got back on the court this past weekend, they were looking to start the new year on the right foot.

Hi-Line basketball got started last Tuesday with the Chinook Sugarbeeters beating Chester-Joplin-Inverness, 58-30, in a District 9C matchup. The Sugarbeeters took an early lead as they led 20-14 at halftime. The Sugarbeeters then dominated the third quarter, 23-3, to pull away for the victory. Hallie Neibauer led Chinook with 22 points in the game.

The Rocky Boy Morning Stars played on Thursday night against Malta. While they played a tough game, the Star...