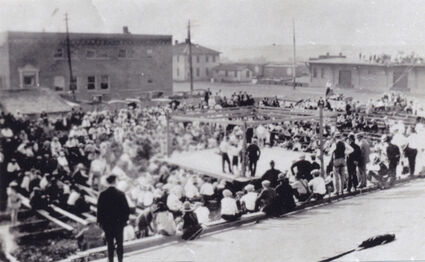 Work progresses on the two-story brick 90-foot-by-80-foot building with a basement that now is being remodeled into the future home of the H. Earl Clack Memorial Museum.

Few call it the Nash-Finch Company or the Havre Transfer and Storage with the yellow Mayflower moving trucks. Some know it as the Anderson Wholesale Company and many as Griggs Printing. This building is located on the west side of Fifth Avenue between Main and First Street facing Fifth Avenue, at 2 Fifth Avenue.

In February of 1892 a tract of land in the townsite of Havre was surveyed and subdivided into lots. Oct. 14, 1892, three lots were bought by three different purchasers, lot 1 for $28, lot 2 for $42 and lot 3 for $14, all in block 3 of the Havre Townsite. Several dwellings and outbuildings were built on these lots.

The voters of Havre voted to install an industrial track on Main Street through town in 1916. It was put in to help the wholesale companies and other merchants who were located by the tracks to unload their stock from freight cars. This track was street level and planked. Each spur line would go to a business and not disrupt the trains on the main line. The north end of Northern Grocery Company had a spur line going to it also.

Oct. 5, 1916. Northern Grocery Company bought lot 1, 2 and 3 in block 3 in the Townsite of Havre for $12,500. The outbuildings were removed so they could build their warehouse on it. In 1917, they built a brick two story 90-foot-by-80-foot building with a full basement on the north part of the lots. It's interesting to note the five directors were, W. K. Nash and F. P. Nash, both from Minneapolis, Minnesota, and H. B. Finch, W. E. Dietz and T. P. Griffin, all from Grand Forks, North Dakota. 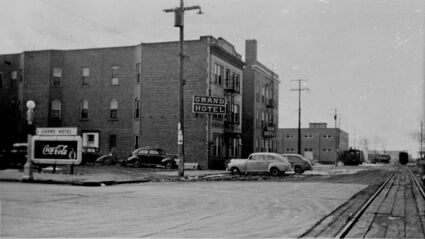 An industrial track with a spur line to the Ryan Havre Co. runs down Main Street in Havre in 1941.

Oct. 1, 1925, Northern Grocery Company sold to the Nash-Finch Company, which also sold groceries. Then, Oct. 25, 1951, Nash-Finch Company sold to the Ryan Havre Company. The next day, Oct. 26, 1951, the Ryan Havre Company sold to James Newman and Elmer Hansen, owners of Havre Transfer and Storage Company and agent for Mayflower national moving service. March 1, 1958, James and Gwendolyn Newman sold to Elmer Hansen, making Elmer Hansen the owner of the property. Through the years, space was rented out, but the renters were not owners of the property.

Dec. 28, 1960, Elmer and Irene Hansen sold to Joseph and Helen Anderson. They started Anderson Wholesale, the sign you see on the building. Then in 1988, Joseph and Helen Anderson sold to Jim and Bonita Griggs and it became Griggs Printing. In 2013. Jim and Bonita Griggs sold to the H. Earl and Margaret Turner Clack Memorial Museum Foundation Inc. letting the museum have its own historical home.