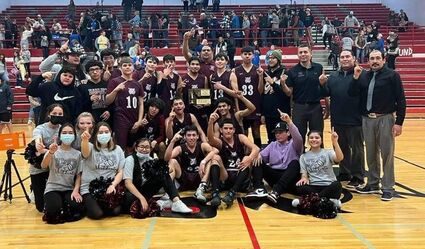 The Harlem Wildcats pose for a team photo after winning the District 2B boys championship last Saturday night in Glasgow.

While the District 9C basketball tournaments raged on in Havre over the weekend, other Hi-Line schools began their postseasons this past week. The Rocky Boy and Harlem boys basketball teams represented the Hi-Line well in their tournaments.

Rocky Boy got the 1B tournament started in Shelby Thursday with a 64-42 win over Conrad. The Stars got off to a strong start...