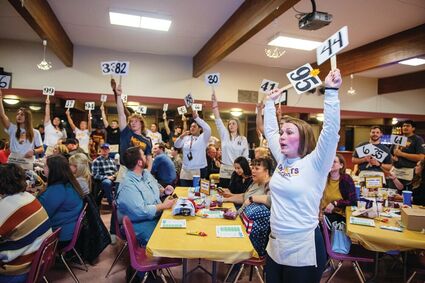 Montana State University-Northern athletes hold up paddles Friday in Northern's Student Union Building Ballroom indicating a bid during the main event at the university's Alumni Auction. In that event, a timer is started for each item auctioned. Northern athletes carrying numbered paddles watch for people who want to bid on the item. If someone gives them a dollar, the volunteer holds up the paddle until the number is called by the auctioneer. If someone's number is called, they have to put in another dollar to have the paddle raised. The last number called before the timer goes off wins the item. The Alumni Auction is one of the main fundraisers for Northern scholarships.