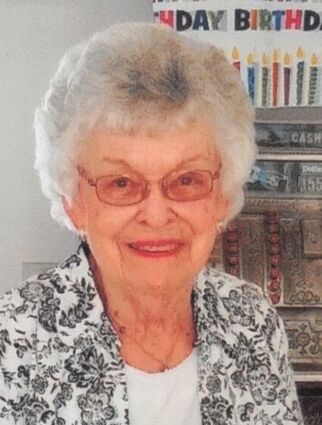 Memorial donations in Mary Lou's name may be made to St. Jude Catholic Church, PCCW, or to the donor's choice.

Please visit Mary Lou's online memorial page at wwww.hollandbonine.com to send a card or leave a message of condolence.

Mary Lou was born in St. Cloud, MN, to Martin and Olivia (Molitor) Blommer. Her father died when she was young, and her mother had to go out and work. She was raised by her grandparents, Peter and Marie Molitor.

Mary Lou attended Catholic School in St. Cloud and graduated in 1947. After graduation her mother answered an ad for a cook and waitress in Havre. Having relatives in the Bear Paws, they made the journey west. Upon arriving in Havre, Mary Lou worked at Bunkers Up & Up Café.

Mary Lou met her husband Donald Golden, and they were married in May of 1950. They were blessed with three children, Doug, Karen, and James Peter.

Mary Lou was very active at St. Jude Thaddeus Church. She volunteered to work dinners, funeral luncheons, bazaars, or wherever she was needed. She always had a ready smile and loved to help people.

As a stay-at-home wife and mother who loved to bake, Mary Lou started making fancy wedding cookies as a business. Her cookies were in great demand.

Mary Lou belonged to Catholic Daughters and TOPS, where she developed many friendships.

Mary Lou was preceded in death by her parents; husband, Don, in 1980; son Doug, and grandson Michael.

She is survived by her children Karen (George Green) of Columbia Falls and Peter (Karen) of Havre; six grandchildren, Corey, Heather, Rachel, Donnie, Tiffany and Kevin; eight great-grandchildren; and several nieces and nephews.