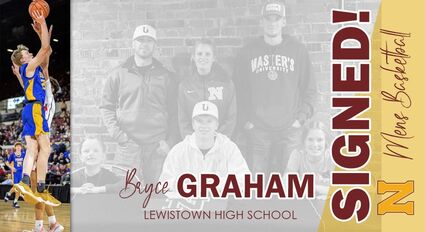 Yet another Montana high school standout has decided to play basketball for the Montana State University-Northern Lights, and head coach Shawn Huse.

Last week, Huse announced the signing of Lewistown guard, Bryce Graham. The 6-2 captain of the Golden Eagles this past season, Graham headed the attack, running the point position and took on several roles for the highly talented Class A state runners-up team.  Averaging 10 points per game, almost four assists per game, three rebounds per game, and 1.4 steals per game. Graham earned First Team All-Conference Honors.  He also played remarkably well in helping pace his team to a Class A HIT tournament championship over the always-tough Class AA HIT tournament team. Bryce plans to focus on the trades program and civil engineering at MSU-Northern.

"Bryce is another really good fit at Northern," coach Huse said. "His style of team-first play combined with his academic interests, really go well with who we are here. He played an integral role in terms of leadership, shooting, scoring, defense and giving his squad anything needed for each possession to be successful. He had a very solid season after coming off a tough injury the year before.

"He has a very smooth shot, sees the floor well, handles the ball well, and can finish drives in transition and in the half-court," Huse continued. "Given the weapons they had at Fergus this year, Bryce did a nice job of scoring when needed or facilitating and even deferring to get other key scorers their looks.  He has been raised and coached very well and really gets what it takes for a basketball team to be successful. We are excited to have him on board and look forward to watching his progress and growth here at the collegiate level."

The Lights are coming off another good season, winning 19 games and earning a home playoff game vs. Rocky Mountain College. After advancing, their season came to an end in a close loss at Carroll College. They return a great deal of experience from the 2021-22 team, after graduating their two exceptional seniors.