Northstars get off to hot starts against Billings Expos 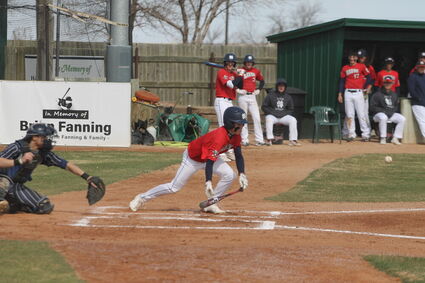 Havre's Ezra Pyle bunts against the Billings Expos AA team at Legion Field on Sunday. In their second weekend of the season, the Havre Northstars went 3-1 against the Expos.

While it is early in the season, the Havre Northstars American Legion baseball club had their hands full with four games against the Billings Expos AA team at Legion Field this past weekend. But the Northstars looked like they were in midseason form already as they went 3-1 against the Expos. Havre head coach Patch Wirtzberger was most impressed by the Northstars' pitching over the weekend.

"Our pitching was really strong," Wirtzberger said. "Our guys didn't walk a lot of guys and competed through a lot of really tough at bats and gave us a chance to win and that's what we're looking for....