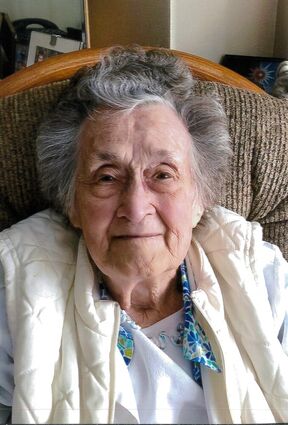 Graveside services will be Tuesday, May 31, at Inverness Cemetery at noon. Visitation will be prior to service from 9:30-11:30 a.m. at Rockman Funeral Chapel in Chester.

Anabelle was born September 28, 1922, in Chester to James H. and Mary Elizabeth (Ovens) Pettapiece. She was raised in the GooseBill area, attended Earl Country School, and graduated from Chester High School in 1940.

Anabelle met Alvin Barbie in 1940 and they would marry in 1941. A few years later they moved to their farm north of Inverness.

Anabelle eventually lived in the Sweetgrass Lodge for 17 years and Wheat Country Estate for last four years. Miss Anabelle was excited to be able to attend a Chester High School All School Reunion where she found out at the parade that she was not only the oldest alumni but one of the Grand Marshals of the parade! Anabelle would tease her children that she was a Chester Coyote and they were an Inverness Cardinal. "Coyotes eat cardinals, don't you know?"

Anabelle was a member of the Methodist Church and enjoyed cooking, gardening, housekeeping, scrapbooking, and hiking in the Sweetgrass Hills.