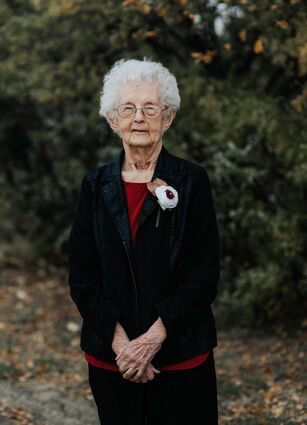 Verda was born October 1, 1921, in Havre, MT, to Edward and Emily "Marie" (Harlem) Green. She was raised by her mother, Marie, north of Joplin and attended Burke country school until eighth grade.

Verda married Ernest Evans September 21, 1940, in Hingham, MT, at Our Lady of Ransom Catholic Church. Ernie and Verda lived their entire married life in the community of Inverness.

Verda was a homemaker and excellent cook and baker. Her family loved her fresh-baked bread, pies, and cookies. She could fry a deer steak like no one else. Ernie and Verda always had a large garden, which made her meals the freshest.

Verda was a lifelong member of Sacred Heart Catholic Church in Inverness. She was a woman of very strong faith and could be found in her spot, the third pew of the church, twice weekly. The church was her passion and she loved volunteering there.

She wrote thousands of letters and birthday cards to family and friends. Postmasters would say she personally kept the Inverness Post Office going.

One of Verda's pastimes was to watch sports. She loved professional baseball. Her favorite teams were the Minnesota Twins, Chicago Cubs, Colorado Rockies and Seattle Mariners; primarily since she had family living in those towns. Her favorite NFL team was the Dallas Cowboys because she loved coach Tom Landry. She said he looked like her only uncle, Carl Harlem. She also liked the Calgary Flames but didn't like watching hockey because of the fighting. But, of course, her favorite team of all time was the Inverness Cardinals. She spent many hours in the gym and on the field watching her four athletic sons. In her later years, she loved following her grandchildren and great-grandchildren.

Her hobbies also included needle point, latch hook, playing cards and reading the daily newspapers, but what Verda spent most of her time doing was worrying about everyone and everything. Her family was her life and she wanted to make sure they were safe, happy and doing what they should be doing even up to her last hours. Verda was the original neighborhood watch.

Verda was happiest when giving of herself to others. She loved visiting and touched the hearts of all who were fortunate to come across her path. She had a great sense of humor and her kindness and generous spirit were always in evidence. One word that would describe Verda is "joy." She found joy in all things through her long life and always gave much joy to others. She remained a lifelong friend to all that met her.

Memorials can be made to Sacred Heart Circle, Rudyard Ambulance or donor's choice.