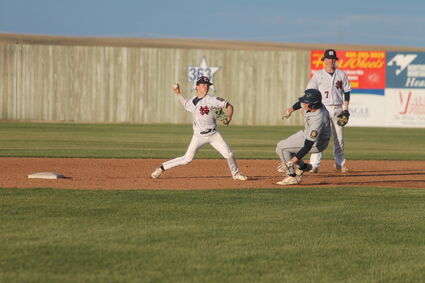 Havre's Ezra Pyle fields the ball at Legion Field last month. On the road Tuesday night, the Havre Northstars split a conference doubleheader against the Lewistown Redbirds. The Northstars lost the first game, 5-4, before winning, 8-5, in 11 innings in the second game.

With the school year and spring sports season over, the Havre Northstars American Legion baseball club now has all its players as they head into the summer. The Northstars started the summer on the road Tuesday night in a conference doubleheader against the Lewistown Redbirds.

In their first conference games this summer, the Northstars had their highs and their lows. They made several mistakes in their first game that led to a 5-4 loss. In the second game, they battled to win, 8-6, in an 11-inning contest.

"It was kind of a mixed bag today," Havre head coach Patch Wirtzberger said. "I d...