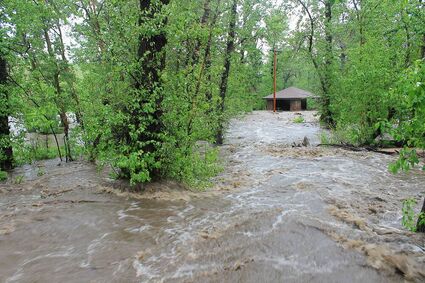 The past few days' rain overwhelmed the Bear Paw Mountains, leading an agency on Rocky Boy's Indian Reservation to close access to some parts of the mountains and leading to flooding on Beaver Creek Park.

The Chippewa Cree Tribe's Natural Resource Department said in a post on the tribe's official Facebook page that the rainfall had caused a rise in all creeks. Because of that, it was declaring the closure of the Bear Paw Mountains on the reservation in both Beaver Creek and Big Sandy Creek areas until further notice.

The post said the department will reevaluate the situation Friday and the let the public know the status of the closure.

"Until then, please refrain from going to the mountains at this time," the post said. "Only employees who are monitoring waterways and roadways will be allowed in these areas."

National Weather Service said about 4:30 p.m. Wednesday that the storm system in the area had dropped about 3.05 inches of water in the northwest Bear Paws at that time. The report in the southeast part of the mountains was much higher, at 5.06 inches. 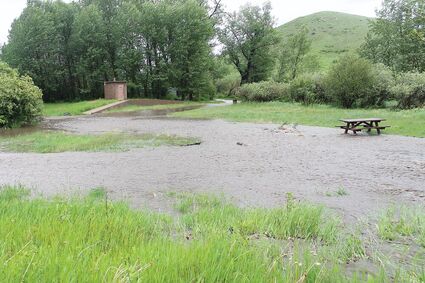 Water that overflowed the banks of Beaver Creek flows across a site north of Rotary Pond Wednesday at Beaver Creek Park.

The flooding in Beaver Creek Park was much worse farther south Wednesday afternoon, with the creek spilling over its banks and flooding the region south of the pavilion at Lions Campground with other sites at that campground flooded and water flowing over the roads in some spots.

Beaver Creek Highway, Montana Secondary Highway 234, was not underwater in the park as of Wednesday afternoon, although water had overflowed the creek and was running next to the highway at some points.

Other areas also were heavily flooded.

Water had overflowed the bank of the creek north of Rotary Pond and was running through a campsite there, and water had cut off the access to Doney Campground, with other areas also underwater.

As of Wednesday afternoon, with some light rain still falling off and on, the flooding on the park was not as severe as in 2010, 2011 and 2014, when the region was declared a federal disaster area.

Watch for more on this and the other impacts of the rains in Friday's edition of Havre Daily News.