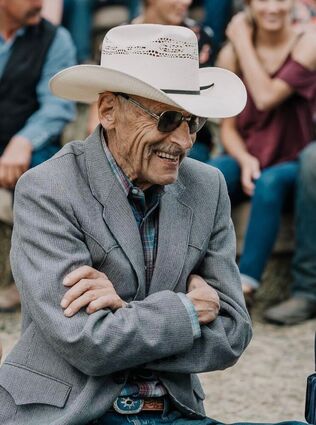 Conrad Owen Nystrom, 89, passed away in his home on his ranch south of Havre Thursday, June 9, 2022.

His memorial service will be conducted at 11:00 am on Saturday, June 18, 2022, at the Havre Seventh Day Adventist Church.

Memorial contributions in Conrad's honor may be made to the North American Bluebird Society at http://www.nabluebirdsociety.org/donations-other .

At his request, cremation will take place.

You may send a card or leave a message of condolence for the family on Conrad's online memorial page at http://www.hollandbonine.com.

Conrad was born on January 16, 1933, in Havre, Montana, to John and Evelyn (Mayer) Nystrom. He was raised on a ranch south of Havre in the Bear Paws. He attended grade school at the Eagle Rock Country School south of Havre and high school at Mount Ellis Academy near Bozeman, MT. He earned a bachelor's degree at Walla Walla College and a master's degree at Northern Montana College, later renamed Montana State University Northern.

Conrad taught at Mount Ellis Academy from 1955-1959, and then he began operating his own cattle ranch south of Havre.  In 1962, he accepted a position as a welding instructor at Northern Montana College. He eventually became a professor emeritus, and he continued as a rancher/welding instructor until 2012, when he retired from his professorship.

Conrad was active in several civic service organizations (Hill County Conservation District, Bear Paw Volunteer Fire Department, Hill County Scale Association, Vocational Industrial Clubs of America). He facilitated the removal of many car bodies that were polluting the Milk River, and he participated in the development of the Beaver Creek Trail and the range monitoring site at Beaver Creek Park.

Conrad was a hard-working cowboy who enjoyed ranching, and he welcomed opportunities to help his neighbors. He was an excellent welder and craftsman, and he was respected by many in his numerous professions.

Conrad considered his greatest accomplishment to be his family. He took great pride in his children, grandchildren, and great-grandchildren. One of his highest priorities was to help each of them to pursue higher education and develop a strong work ethic.

Conrad was preceded in death by his parents, John and Evelyn, two brothers, Johnny and David, one son, Steve Cook, and one grandson, Shawn Kelly.