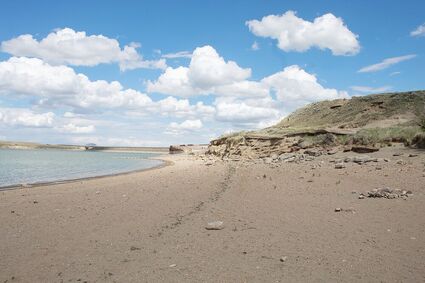 Dry beach is seen at Fresno Reservoir Thursday. While early to mid-June rains helped with the drought in the area, it was not enough to make up for the moisture deficit experienced this year and in the past few years. This part of north-central Montana is listed as in the worst condition in the state on the federal drought monitor map released Thursday.

While some rain fell in this part of north-central Montana in the first part of June, and substantial precipitation hit much of the state from April through June, most of the state has moved from dry or drought condition listings on the U.S. Drought Monitor map released Thursday. Most of Hill and Liberty counties still are listed as in extreme or exceptional drought, the two worst listings on the monitor.

Blaine County has moved from being listed as in extreme drought to mostly in severe drought, with the very northeast corner shown as in moderate drought.

Most of Chouteau County remains listed as in severe drought, with the very western part of the county in extreme drought.

Much of the rest of the state has moved from being listed as in moderate to extreme drought at the end of May to conditions listed as no drought conditions to moderate drought.

Much of the last three months' snow and rain that fell in the state - including an April storm that closed roads and schools - missed this part of Montana.

Heavy rain fell in this region in early and mid-June, including a Bear Paw Mountain storm that flooded Beaver Creek Park, but the last two days of predicted rain - which was expected to drop another 1 to 2 inches in the Havre area - missed the area.

Havre received 2.99 inches of rain through June 29, although most of that was in the first two weeks of the month, more than a half-an-inch above the normal value of 2.42 inches for June 29, but it is short more than two inches for the year.

The June rains helped with vegetation growth, but local producers say things already are drying up.

Nutter said that could become a very dangerous situation.

He said the area had a lot of grasses sprouting and growing quickly that now are turning brown and that could become very dry and prone to fires in the next few weeks.

"We're going to go into the fire season pretty quickly, he said. " ... We're going to have to start looking at trying to avoid creating any sparks, anything that could start fires."

But this weekend could give a bit of a break as far as moisture, although it might stifle some celebrations.

"We are looking for additional moisture that might come at the expense of some afternoon picnics or fireworks, Nutter said. 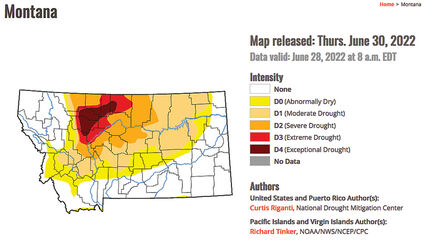 He said this part of Montana has a chance of showers and thunderstorms Sunday that could bring as much as a quarter-inch of rain, although variables including where the heavier showers will fall makes it difficult to predict how much rain will fall that day, as well as Monday, Independence Day.

As is typical with summer rainstorms, that all depends on where the heavier showers fall, he said.

Monday could see half an inch to two-thirds of an inch on the plains and up to an inch in the Bear Paw Mountains, he said.

"People might need to be ready to keep an eye on the sky and have some alternate plans," he said. "The good news, of course, is that it is much-needed rainfall. It probably will be welcome by most.