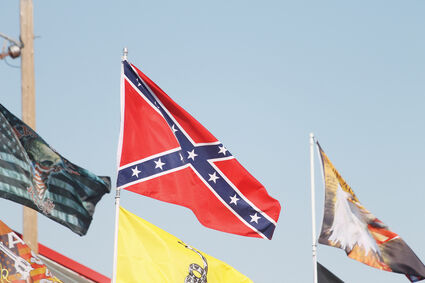 A Confederate battle flag flies over the Great Northern Fairgrounds Sunday at a booth near the arena main entrance.

Editor’s note: This version corrects an editing error that referred to the battle flag of The Army of North Virginia as “The Stars and Bars.” That refers to the original flag of the Confederate States of America.

During this year's Great Northern Fair, the battle flag of the Army of North Virginia, widely recognized as a symbol of white supremacy, could be seen flying prominently at a flag-selling booth in front of the fairground's arena main entrance.

No members of the Great Northern Fair Board or the Hill County Commission have been willing to comment on the propriety of such a sy...

Like many others, I saw the flag and saw the thermometer and got back in my vehicle and left. I normally spend anywhere from $200-300 dollars at the fair with my grandkids. As I was leaving I visited with others that did the same thing. I have supported this Fair all my life. I guess we aren't all a part of this community. So go ahead and fly the Confederate flag and keep losing money, it's your call folks