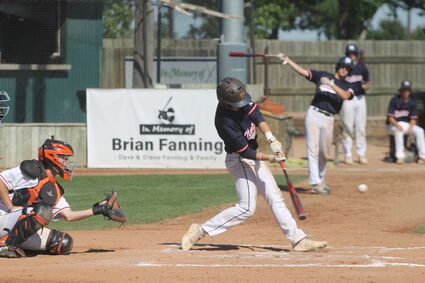 Havre's Eli Cloninger bats against the Vauxhall Spurs on Sunday at Legion Field. Cloninger as well as his teammates Brody Nanini, Trenton Maloughney and Theron Peterson were named North A District All-Conference for their seasons.

As the Havre Northstars get going at the state tournament this week in Belgrade, it is important to recognize the performances of their players that got them there. This past weekend at the North A District tournament, the all-state and all-conference teams for the summer were released and several Northstars were recognized for their performances this season.

Brody Nanini was named all-state in Class A Legion baseball for the season he had as a pitcher. As the leading pitcher for the Northstars, he recorded a 2.754 ERA and he went 7-6 in his 15 appearances this season. In his 81.1 innings...