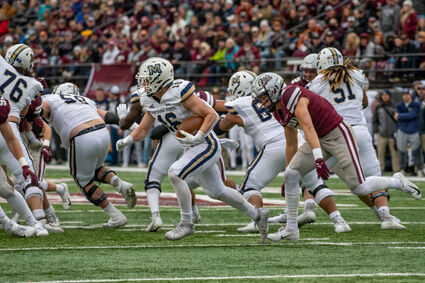 Montana State's Tommy Mellott runs the ball during the 2021 Brawl of the Wild last November in Missoula. After that game, Mellott took over the starting quarterback duties for the Bobcats and led them all the way to the FCS championship game. The Bobcats are now ranked fourth in the FCS as they begin the 2022 season Saturday night in Bozeman.

It's going to be hard to top the 2021 Montana State football season. After all, the Bobcats went on a run to their first FCS championship game in 37 years. But, as fun as that season turned out to be, MSU just might have a team to match or better it this fall.

With second-year head coach Brent Vigen back at the helm, the Cats, who finished second in the Big Sky and faced North Dakota State in the national championship game back in January, are poised for an exciting season as the Cats enter the fall ranked No. 4 in the FCS Preseason Poll, and excitement at an all-time high.