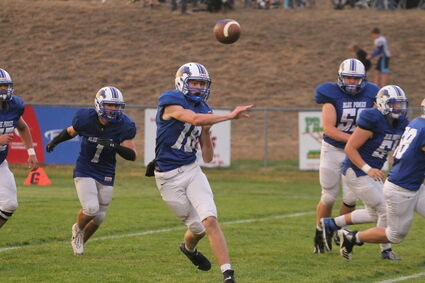 Havre's Ciaran Courtnage throws a pass against Billings Central at Blue Pony Stadium this past Friday. The Rams defeated the Blue Ponies 35-0.

On Friday night at Blue Pony Stadium, the Havre High football team hosted a tough Billings Central squad. The Rams came into the contest undefeated with double-digit wins in every game this year. Even though they had home field advantage, the Blue Ponies could not slow down the Rams as Billings Central defeated Havre 35-0.