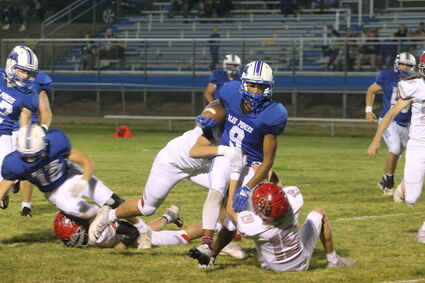 Havre's Tre Gary runs through the Lockwood defense during last week's HHS homecoming game at Blue Pony Stadium. The Blue Ponies play their final road game of the regular season when they visit Livingston tonight. Havre wraps up the regular season with a Thursday night home game against Laurel next week.

The Havre High football team has been riding high the past few weeks. The Blue Ponies have won three straight games, making their record 5-2 on the season. Now tonight, the Ponies look to keep it rolling as they head on the road to face Livingston. While the Rangers have not had the best season, HHS head coach Jake Eldridge expects a challenge for the Ponies tonight.

"They're really competitive on both sides of the ball, especially up front," Eldridge said. "We expect another competitive ballgame on the road where we've actually been playing pretty good so I would expect that to continue....